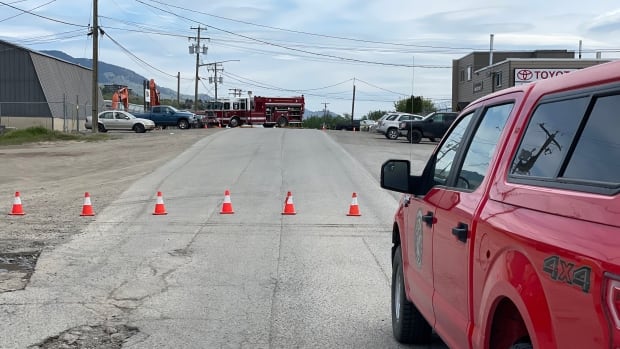 1 dead after ammonia leak at ice plant in Kamloops, B.C.

One person died after an ammonia leak Thursday at an ice-making plant in an industrial area of ​​Kamloops, B.C.

The leak began inside the Arctic Glacier Ice building at 790 Sarcee St. East in the Mount Paul Industrial Park around 10:30 a.m. PT.

About six people in stable condition were assessed at the scene, according to British Columbia Emergency Health Services.

The Interior Health Authority says four people have arrived at the Royal Inland Hospital in relation to the incident. Police say the man who was taken to hospital in critical condition has since died.

Interior Health says the others were treated as needed and released.

Deputy Fire Chief Ryan Cail told The Canadian Press that the deceased is believed to be a man in his 60s.

According to The Canadian Press, Cail says there was a malfunction with an ammonia bottle.

“The valve dislodged, broke or malfunctioned. We don’t know how it discharged, but a large amount of ammonia was released,” he said, adding that two other employees had managed to escape from the building.

“The details of how this specific individual was unable to get out are unknown” and will be investigated, he said.

The RCMP, WorkSafeBC and the BC Coroner’s Service are also investigating the incident.

A hazmat team with Kamloops Fire Rescue responded to the leak, as did WorkSafeBC. The industrial park is located north of downtown Kamloops, across the South Thompson River.

Cail says the crews didn’t realize they were dealing with ammonia until they arrived to find a strong smell in the air.

“Teams learned once on site that it was actually a cloud of ammonia that had escaped from a cylinder in the facility inside the building,” Cail told CBC. News.

Chris Leader, who works about 200 yards from the site of the leak, was having lunch in his truck when he says he heard a “pop” and saw a “big big” plume of smoke coming out of the Arctic Glacier Ice building. He said the smoke rose about 30 meters and blew east.

He says he and his colleagues were ordered to evacuate as quickly as possible, but were not told how long they should stay away.

Ammonia is a colorless but pungent gas used in refrigeration systems, power generation and manufacturing.

Inhaling low levels of ammonia can irritate the eyes and respiratory tract, but large amounts can be fatal. Three people were killed by a leak while trying to repair ice-making equipment at a hockey rink in Fernie, British Columbia, in 2017.

BCEHS confirms that 5 ground paramedics and 2 supervisors responded to the 700 block of Sarcee Street.

RCMP constable. Crystal Evelyn said most roads around the scene have reopened, except for the immediate Sarcee Street area.

In a tweet, the City of Kamloops said the scene was considered stable and evacuees could “go about their business in the area.”