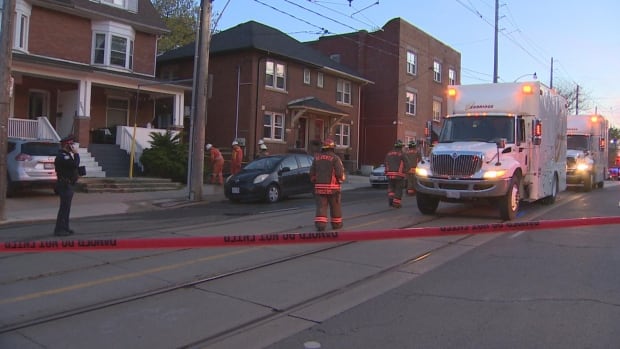 A driver died after a truck crashed into his house, causing a gas leak

A driver has died following an accident in east Toronto that caused a gas leak on Sunday, emergency crews said.

Toronto police responded to a collision around 7:30 p.m. on Queen Street East and Kingswood Avenue where the driver of a truck had rammed into a house.

The collision severed nearby gas and electric lines, causing a gas leak. Police Inspector Jeffrey Bangild told CBC News the gas line was plugged an hour after the collision by a crew from Enbridge Gas.

“A southbound vehicle on Kingswood approaching Queen Street passed through an intersection into an alley and into a carport,” Bangild said. “The velocity of the impact severed a gas line and caused the evacuation of two buildings.”

Crews from the Toronto Fire Department and paramedics also attended the scene. Doctors performed CPR on the driver after firefighters pulled him from the truck, but he was not taken to hospital and initially remained unresponsive, emergency crews said.

Toronto police later confirmed to CBC News that the driver had died. Police are investigating whether the driver had a medical episode or died as a result of the collision.

The age of the driver has not been confirmed.

The road between Queen Street East and Scarborough Road to Victoria Park Avenue will be closed while police investigate and the gas leak is repaired.