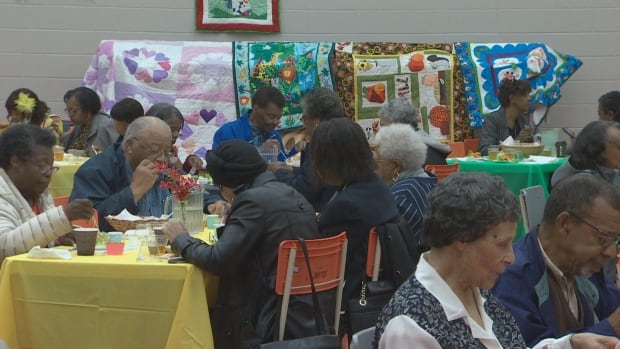 Dozens of black seniors from across Nova Scotia gathered at the East Preston Recreation Center on Thursday to mingle, eat and be celebrated, in an event called Celebrating Resilience.

Organizers say they held the event to recognize the contributions of black seniors in the community and show that their accomplishments will not be forgotten.

“We’ve been here for many years, and you know we’ve been through so much lately,” said Dolly Williams, chair of East Preston Seniors Club and one of the organisers.

“I think it was a great way to get people out to have fun and celebrate the resilience of seniors.”

She says they paved the way for the younger generations to come.

Most of the participants were over 80, Williams said, with some in their 90s and 100s.

Husband and wife Barbara and Peter Clayton said they were happy to be there so they could mingle with others, but also because they felt a duty as elders to be part of the ongoing discussions in the black community.

“That’s why we represent and go to functions and stuff to see what happens.”

Clayton said it was good to see young people at the event as well because “we can all learn from each other”.

Genevieve Howe, another senior member of the community who attended, said she was delighted to see the event in East Preston as there aren’t many in the area.

“I thought it would just be a wonderful thing to come and see what’s going on, and I’m glad I came because so far it’s just been exciting to be here.”

Williams says the chicken dinner with gingerbread dessert was cooked and served by other members of the community because “they wanted to do it all themselves.”

She said it is important to remember the ancestors who came before us.

“If we look back on our history, you’ll see how strong the black community was and still is,” Francis said.

“As I always say, I stand on the shoulders of our ancestors…look how they fought for justice, look how they could have been first in an organization or how well they did. So keep that in mind and don’t lose this.”