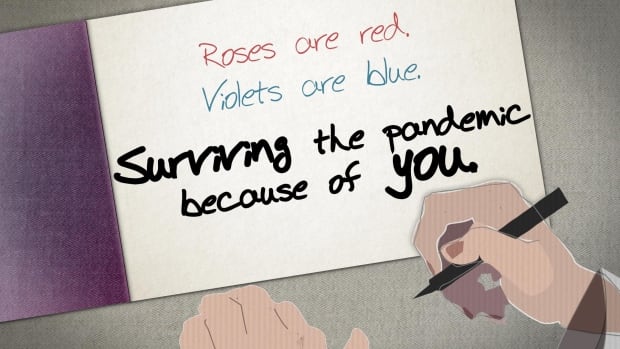 This first-person article is the experience of Dave Pineau, speaker and researcher living with HIV. For more information on CBC’s first-person stories, please visit the faq.

This story is part of CBC Ottawa Project Give, our annual vacation campaign. The special programming day takes place on Friday December 10th and we will meet the people who make the season enjoyable by sharing food through Ottawa Food Bank, and show acts of kindness throughout the community.

I have been HIV positive for 37 years now.

I was actually one of the lucky ones. I discovered it at the start of the disease process, in 1985.

Back then I was struggling with drug addiction, living on the streets, which made it difficult to be in a health care mindset.

For a while, it was a never-ending struggle. I even sold drugs for a while to support myself, when I was in downtown Vancouver’s Lower East Side. I regret it now, but back then it was survival.

When I found out, I was doing really well. I had met a woman and we were sharing an apartment together. She was working, I was working. She loved to donate blood so I went with her to donate too.

A few weeks later, a letter arrived in the mail.

He said, “We regret to inform you that your blood has tested positive for AIDS.”

It was a very short paragraph and at the bottom, “If you have any questions, please call Dr. So-and-so.”

I don’t know if you’ve ever heard the expression, “See your life go by in front of your eyes?” It was just surreal. I felt so far removed from the moment, didn’t I?

I recovered and telephoned the doctor who had sent me this letter. I was pissed off, I had questions.

She started criticizing me for donating blood in the first place because she asked me if I had ever used intravenous drugs. I said it was a long time ago, I haven’t been using it now and not for a long time.

She scolded me by saying something like “you should be ashamed of yourself”.

I asked him, “How long do I have to live?

She said “three to five years if you take a multivitamin and quit smoking.” And she hung up.

It was like that back then because there was so little information, even the doctors didn’t understand what they were dealing with.

This relationship broke soon after.

I moved to Toronto, where I worked as an outreach worker and speaker for the Toronto People with AIDS Foundation.

But I struggled with drug addiction again, and in 2000 I moved to Ottawa.

For a while I lived in a rooming house – it was 185 square feet including bathroom. But there were drugs around and it wasn’t a healthy place for me.

When I got stable housing with Bruce House it saved my life.

Now there is a pandemic.

Since I am HIV positive, it is always risky to take public transport. I also have hepatitis C and a couple of other minor ailments. Technically, I am not immunocompromised because the doctors say that I am on medication and that I am well managed. But I’m sure they weren’t talking about people with multiple illnesses like me.

I have always been susceptible to lung infections. Before COVID, it took me three to four weeks to get rid of a cold that the average person would heal in a matter of days. It still goes down to my chest every time.

He said “we regret to inform you that your blood has tested positive for AIDS”.-Dave Pineau

It meant I didn’t have to go out as often and put myself in danger.

It also meant I could save a bit, especially after the price of groceries increased. It’s shocking – I recently bought a head of broccoli in the produce section and it was almost double the price before COVID.

Having that little extra cash means I can buy things like clothes that I need but put off. Like a pair of shoes that fit you, if the Salvation Army isn’t your size.

There is also the loneliness of this time. Before, I was out every day doing things. Now I really feel the isolation, and it kind of changed my life.

Check-in calls and food deliveries really make a difference. Just half an hour to chat, sometimes for nothing. It’s just nice to have that contact. I still look forward to it.

So I wrote the folks at Bruce House a thank you note.

He said, “Roses are red. Violets are blue. Survive the pandemic because of you.”

Dave Pineau has worked as a research peer associate, examining a variety of topics, including the role of stable housing for people living with HIV. He was diagnosed 37 years ago.