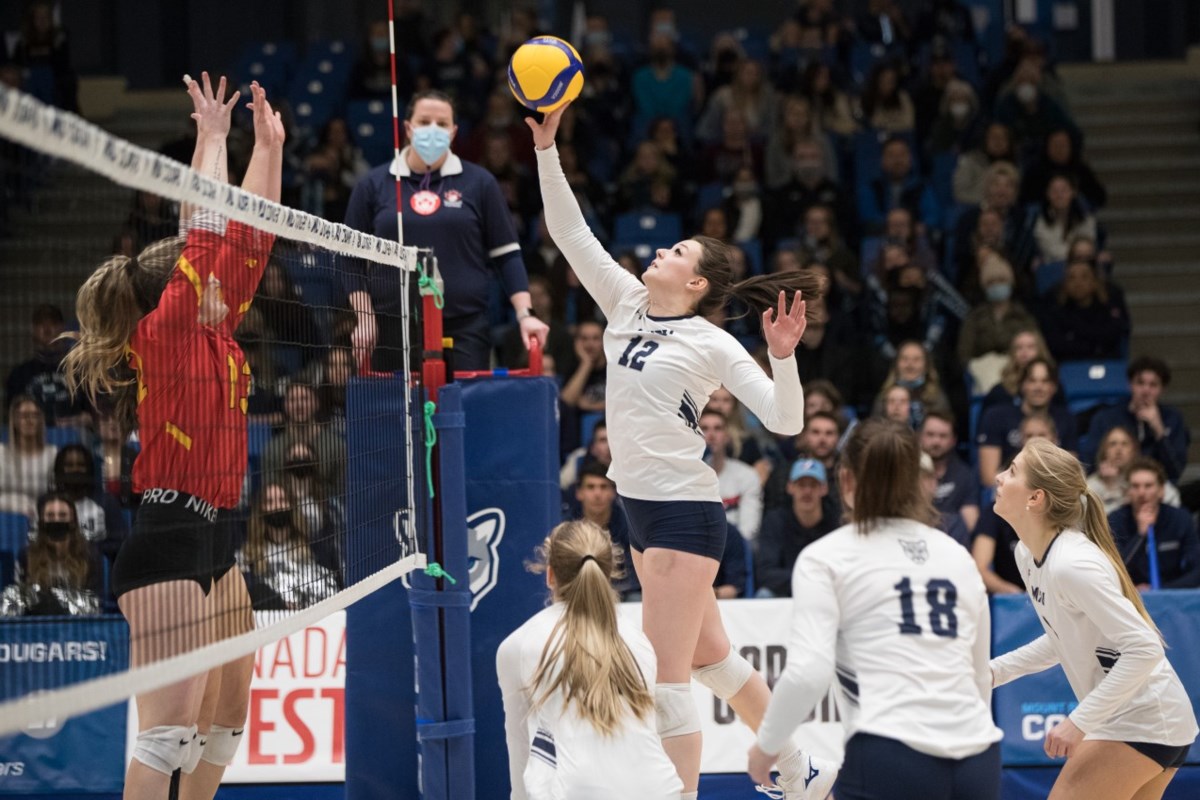 The fourth-year outside hitter had a game-high 15 kills as the Cougars captured the first-ever MRU volleyball medal at a U SPORTS national championship since the school joined U SPORTS in 2012- 13.

MRU went down three sets to one in the U SPORTS National Championship match against the Trinity Western University Spartans to claim silver.

While the Cougars couldn’t quite clinch the national banner, Roe said the players felt good after the initial disappointment wore off, having recognized the magnitude of their achievement in the days that followed.

“I’m so proud of us for what we’ve accomplished over the past few weeks,” said the former Bert Church Chargers student. “That was obviously the history of the program, so it was very cool to be a part of it. We worked very hard to make it happen and proved that we were a good team. It was really great.

The Cougars qualified for the U SPORTS National Championships – hosted at the University of Calgary March 25-27 – after a strong regular season that saw the team finish second in the Canada West conference with a 14-4 record .

After the end of the regular season, MRU went to the nationals with a bronze medal at the Canada West championships with a 5-2 record.

Roe said team chemistry has made the Cougars stand out this year.

“It’s one of the biggest teams I’ve been part of – we had 20 players – and we worked really hard to bond and build relationships with each other,” the 22-year-old said. . “It’s definitely the closest team I’ve been part of. We were all good friends and spent a lot of time together. We have a lot of fun on the pitch and the other teams notice that too.

Once at the nationals, MRU started strong sweeping the Brock Badgers and the University of Alberta Pandas to secure a spot in the final against the Spartans.

Hosting the U SPORTS Nationals in Calgary meant that a sizable cohort of friends and family from Airdrie got to see Roe compete.

“It was crazy and a cool thing to do,” she said. “It was basically a home crowd and we had so much support.”

Roe has spent his entire post-secondary volleyball career with the Cougars, having attended the University of Calgary since 2017.

From an individual standpoint, she had one of her best seasons in 2021-22 and, after a powerful performance in the national final, was named to the tournament all-star team.

As a fourth-year member of the women’s volleyball team, Roe credits herself as one of the Cougars’ leaders on and off the court. With one more year of U SPORTS eligibility, she said she wants to help MRU repeat – and hopefully surpass – her accomplishments this season.

“I’ve been here so long now, and it’s been a cool experience,” Roe said. “Obviously with the tough things that COVID has brought, there’s been a lot of growth and we’ve had some changes in our team.

“But this year has been so amazing. Especially after the last Nationals were canceled…it was so cool to come back this year and after everything we’ve been through, to come back to Nationals and medal. was something special for me and I’m thrilled to have another year to stay and try to do it again.

“I am proud of this team. We worked hard to get there and we will definitely be back next year for this banner.