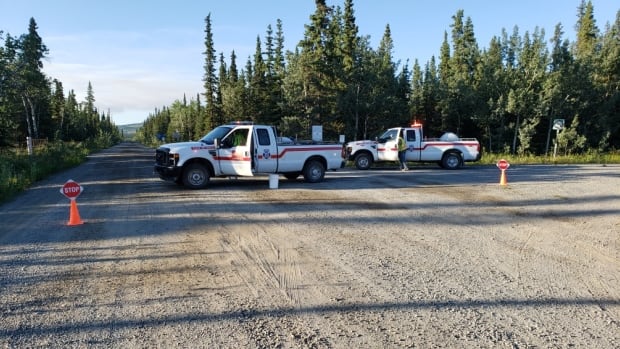 Aishihik Road east of Haines Junction, Yukon, is closed until at least Monday afternoon due to a 24-hectare wildfire burning in the area, according to Forest Fire Management of the territory.

The blaze, named HJ-002, began to burn on the west side of the road on Saturday at the 45-kilometer mark, the department said in an emailed statement.

The fire did not cross the road, but it is closed to traffic from the junction with the Alaska Highway, he said. The Aishihik Lake Campground is also closed until further notice.

“Teams are at work to hold fire on its northern and southern flanks, and on its eastern flank along Aishihik Road,” the statement said. “No damage has been reported to nearby buildings or infrastructure.”

A helicopter and tanker were called in to help with the containment, as the department said it expected stronger winds on Sunday night and Monday.

Three more crews are expected to arrive on Monday, he said, and the route is passable for those who have to leave the area.

HJ-002 began the day after fire crews and community members responded to a forest fire near Aishihik Road, south of the Alaska Highway, on Friday night.

There have been 54 forest fires in the territory so far this year, which have burned 55,862 hectares of land, according to the Government of Yukon.