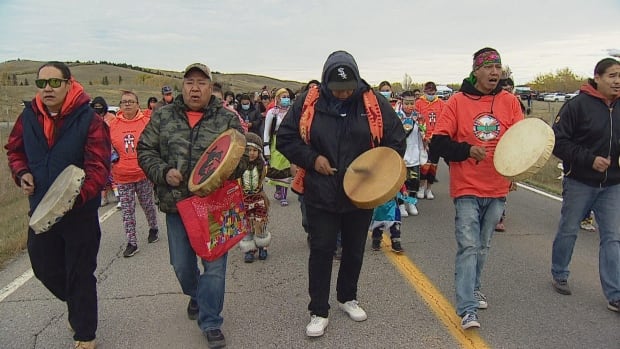 WARNING: This article focuses on residential schools, a topic that can be triggering and distressing for those dealing with past trauma. A 24-hour national residential school crisis line is available at 1-866-925-4419.

A wave of stories from residential school survivors in Alberta arrived on Thursday, as the country marked the first National Day for Truth and Reconciliation.

The day is meant to honor children who died while forced to attend residential schools and those still affected by schools today.

This day has been commemorated in recent years as Orange Shirt Day, which began in 2013 in honor of residential school survivor Phyllis Webstad, whose orange shirt was taken off on her first day of ‘school.

It is the story of Stoney Nakoda First Nation elder Valentina Fox, who survived 11 years at a residential school in Morley, located approximately 60 kilometers west of Calgary.

Fox recalls being thrilled to wear her new outfit on her first day of school, only to take it off and spray it with kerosene.

“I was wearing my brand new moccasins, my brand new little dress, my new jacket, and I was really excited to go to boarding school and not realize that I wasn’t coming home after that,” he said. she declared.

“My mother passed away the following January, and these moccasins were the last thing she did for me. I still think of those moccasins.”

Members of the Stoney Nakoda First Nation community hosted a pipe ceremony and march, which drew support from residents of surrounding areas.

Eva Powder, a residential school survivor, was one of the organizers of the ceremony.

“These children who have not returned home, we want to let them know that they are not forgotten and that we will ensure that they are brought home and placed in their resting place,” he said. she declared.

The Siksika Nation, about 125 kilometers east of Calgary, held a ceremony on Thursday, declaring it a time of healing and truth for the community.

Treaty 7 communities come together to honor the victims and survivors of residential settlements across Canada.

Marches, drums and oranges were part of the ceremonies in Calgary, the Siksika and Stoney Nakoda Nations. While solemn, the events also celebrated resilience and public awareness about Indigenous peoples in Canada. 2:32

Chief Ouray Crowfoot says the Siksika Nation is working to transform some of the former residential school sites into memorial areas.

â€œYou know, take some of the pain that some of these schools have caused and try to turn them into a space for reflection, a space for healing,â€ he said.

For Floria Duck Chief, telling her survival story is part of her healing journey. She survived seven years at residential school and is also a survivor of sexual abuse.

In Calgary, several hundred people gathered in Fort Calgary for the city event, where they listened to Phil Fontaine, the former Grand Chief of the Assembly of First Nations.

Fontaine said the day is a chance for the country to reflect on its collective history of mistreatment of Indigenous peoples.

Red Deer-based artist Ryan Jason Allen Willert has used his art to navigate tough times, racism and reconnect with his culture. This reconnection now takes her on a spiritual journey to improve herself and improve the community. 4:01

â€œI can imagine that sometimes these stories are too hard for people to imagine, that they actually happened. But they did. Many times,â€ he said.

Fontaine said there are still many challenges facing Indigenous peoples, but he is hopeful for the future, especially if Canada learns from its history and its changes.

“So when we take this very special day for our people, this incredibly important moment for Canada, it gives us the opportunity to think deeply.”

Support is available for anyone affected by their residential school experience and for those triggered by the latest reports.

A national residential school crisis line has been established to provide support to former students and those affected. People can access emotional and crisis referral services by calling the 24-hour national crisis line: 1-866-925-4419.