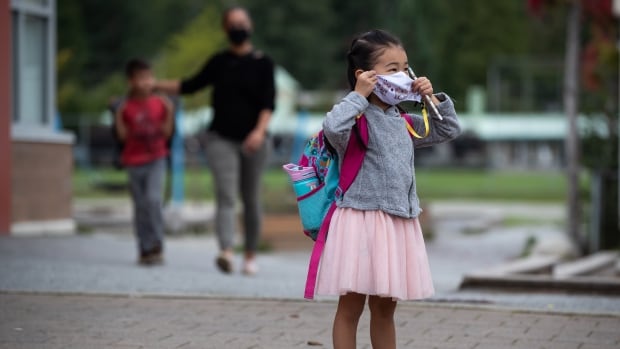 BC parents, teachers and unions call on school districts to introduce mask mandates

Vancouver School District’s extension of a mask mandate that will include Kindergarten to Grade 3 students from
Monday sparked calls for more districts in British Columbia to follow suit in the absence of a province-wide public health commission.

The District of Vancouver informed parents of the change in a letter on Wednesday after a unanimous vote of council members concerned about the increase in COVID-19 cases in children.

Vancouver School District President Carmen Cho said in the letter that requiring all students to wear masks will provide an extra layer of protection to limit the spread of the virus.

Provincial health worker Dr Bonnie Henry has resisted calls from parents and teachers to make face covering mandatory for all students, saying ventilation and limitations on mixing between classes in different grades are also important factors in schools.

Henry said on Tuesday that more children aged five to 11 were being diagnosed with COVID-19 in the Eastern Fraser Health Region because they are not eligible for vaccines and due to lower vaccination rates in at least four communities there.

Kyenta Martins, who speaks for the parent-led group Safe Schools Coalition BC, said an increase in cases should prompt a province-wide mask mandate for all children if the goal is to keep students to learn in schools.

“We are asking for better distance learning for those who cannot enter the classroom,” she said.

“We are asking for rapid testing. And we continue to ask for transparency and data because the data they put on the website is not accurate.”

Henry dismissed rapid tests as unreliable, including for residents of long-term care facilities earlier in the pandemic, and said on Tuesday that regional health authorities would publish potential COVID-19 exposures in schools on their records. websites so parents have an authoritative source of information.

“It takes time for public health to be notified of a positive laboratory test and to do this important case investigation to understand what settings people were in, where they could have picked it up and where they could potentially pass it on. to others, ”she said. noted.

The BC Teachers’ Federation lobbied for a mask mandate for months before Henry implemented it last March, and union president Teri Mooring said on Wednesday there was no justification acceptable so as not to extend it now to the youngest.

“Administrators have the ultimate responsibility for ensuring that schools are safe and healthy spaces. “

The Canadian Union of Public Employees of British Columbia (CAPE BC), which represents approximately 30,000 workers in the public education system, said in a statement that it applauds the Vancouver board’s decision to extend the mask’s mandate to all students and encourage school trustees across the province to vote for a similar extension.

“Obviously, the Delta variant has changed the situation in schools,” said Karen Ranalletta, president of the
union chapter.

Mask mandates in schools vary by province. In Alberta, for example, masks became mandatory in indoor public spaces earlier this month, but schools were exempted as school boards still had to set their own policies.

In Ontario, masks are mandatory within Grades 1 to 12. Quebec has focused its requirements on high-risk areas like Montreal, where face coverings must be worn in common areas, while students in grades 5 and above must also wear them in classrooms.

Amy Johnston, who teaches music to K-6 students at a school in Surrey, B.C., said parents and teachers also urged Henry to impose masks in schools before the move is not taken, and now is the time to extend this mandate to the youngest children.

“Dr. Henry seems to be okay with Vancouver doing it on its own, so there’s no reason other school districts don’t all have emergency meetings to do the same,” she said.

Johnston said she disagreed with the provincial health worker that there was no mixing between the classes because their movements were less restricted without the cohorts that were in place during the last school year.

She said her daughter, who is in kindergarten, willingly wears a mask to school, so there should be no worry that children won’t or can’t use the face coverings to protect themselves.

Parents are that some school districts have not received information on the state of ventilation in schools since the province promised improvements.

The Education Department said all school districts are now reporting information on ventilation improvements through
their health and safety committees and were asked to make it available to the public.

However, Mooring said that while the Vancouver School District has improved ventilation with high-quality filters, the other 59 districts in the province have not, and some information is not available.