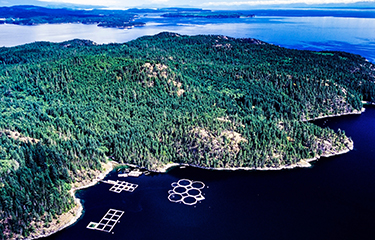 The Department of Fisheries and Oceans Canada has launched an engagement effort to begin planning a transition from net-pen salmon farming in the province of British Columbia.

The move comes just over a month after the department announced it was renewing two-year licenses for marine finfish aquaculture facilities in the region, excluding those on the Discovery Islands. At the time of renewal, DFO Canada announced that it planned to begin a transition process with input from the “Government of British Columbia, First Nations, industry, local governments, stakeholders and British Columbians”.

DFO’s announcement is true to that plan, as the department announced a “commitment to a plan” on transitioning salmon farming to net pens. According to the ministry’s discussion framework, the engagement will begin with an information-sharing process that is expected to conclude in September 2022.

“Wild Pacific salmon are in danger of disappearing forever if we don’t act; this is why the Government of Canada is taking a wide range of measures to halt and reverse the decline of their population,” Canadian Minister of Fisheries, Oceans and the Canadian Coast Guard, Joyce Murray, said in a statement. “We will continue to chart a course for aquaculture in British Columbia, a course that will support the environmentally sustainable growth of the industry, create jobs and help protect our waters and marine ecosystems.

Murray’s statement mirrors that made following the license renewal, and the latest plan re-emphasizes the ministry’s commitment to consulting with a wide range of stakeholders, including Indigenous leaders, local governments, conservation organizations , First Nations governments, the aquaculture industry and the public.

“The feedback and feedback received during these engagement sessions will be instrumental in the development and implementation of the open net pen transition plan, which is expected to be finalized in the spring of 2023,” DFO said in a statement. communicated.

Murray said the framework is part of DFO’s efforts to ensure the sustainability of the industry in British Columbia.

“As the global appetite for high-quality fish and seafood continues to grow, we need to find better and innovative ways to farm fish and protect wild Pacific salmon stocks,” he said. she stated. “A well-developed transition plan is the first step towards growing a viable and sustainable industry in British Columbia.

The announcement of an engagement process was welcomed by several local groups, including the BC Salmon Farmers Association (BCSFA).

“BC Salmon Farmers are pleased to read language in the Government of Canada’s proposed Transition Discussion Framework that aligns with our current operational values,” the BCSFA wrote in a statement.

The Coalition of First Nations for Finfish Stewardship (FNFFS), a group that says salmon farming is “a path to self-determination and reconciliation” for First Nations on the coast of British Columbia, has also said “cautiously optimistic” about next steps.

“Our member nations have asserted our rights and title with federal and provincial governments regarding salmon aquaculture in our waters since March 2022, and today we are encouraged to see how many of our concerns, inputs, languages ​​and socio-economic data have been woven into the fabric of this framework,” the FNFFS said.

However, both groups said the language of the framework, while encouraging, also poses some challenges given the aggressive timeline – the four-phase engagement strategy will be completed by June 2023, according to DFO estimates.

“Given the weight of the potential impact this transition plan will have on our communities economically and socially, and the busy fishing season in the coming months for our people, our coalition nations are calling on DFO to extend the consultation process for the open-net enclosure transition plan through 2024 to ensure appropriate and respectful engagement for each nation,” the FNFFS said.

The FNFFS added that it was concerned about the facilitation of First Nations engagement sessions and workshops by the First Nations Fisheries Council because its “position against salmon farming is well known”, said the FNFFS.

“As such, our coalition will continue to seed transition communication, planning and engagement with member nations, industry and provincial and federal governments to ensure a just transition process,” the FNFFS said.

Although the timeline for the framework is relatively short compared to previous efforts, it is a change of pace for DFO. In December 2020, the ministry suddenly announced that all salmon farms in the Discovery Islands, located in British Columbia, would be completely phased out in just 18 months, a decision that communities and salmon farmers in the region said were completely “blind”. .

Soon after, local salmon farmers, including Mowi Canada West, Cermaq Canada and Grieg Seafood, called on the government for more time to close the farms. In some cases, those requests were honored, while in others, salmon farmers were forced to cull fish, and Mowi ended up closing a salmon hatchery as a result of the decision.