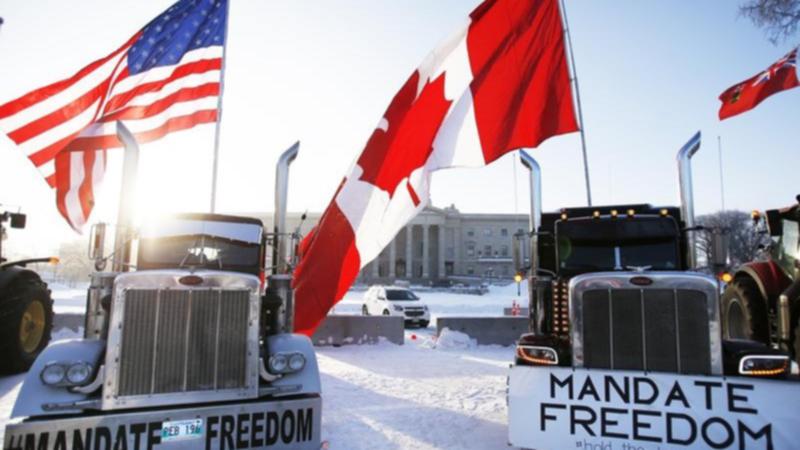 Ottawa police have pledged to quell an “increasingly dangerous” protest by hundreds of truckers who shut down the center of the Canadian capital for eight days to demand an end to COVID-19 vaccination mandates.

The well-organized blockade, which police say relies in part on funding from sympathizers in the United States, is unprecedented by Canadian standards. Hundreds more truckers were planning to enter the city this weekend, Ottawa Police Chief Peter Sloly said.

Some want an end to the federal COVID-19 vaccination mandate for cross-border truckers while others insist that Prime Minister Justin Trudeau be impeached on the grounds that he exceeded his authority by imposing restrictions to combat the pandemic.

GoFundMe removed the Freedom Convoy’s donation page on Friday, saying it violated its terms of service.

In the western province of Alberta, where truckers are blocking a major border crossing with the United States, Premier Jason Kenney said ministers would meet early next week to begin lifting restrictions.

“We can and must move on with our lives, restore our freedoms, and live in joy, not fear,” he wrote on Twitter.

Sloly compared the protest to the Jan. 6, 2021, riot in Washington when thousands of supporters of former President Donald Trump stormed the U.S. Capitol in a bid to overturn Joe Biden’s election victory.

To the growing fury of residents, Ottawa police stayed largely on the sidelines and watched as some protesters smashed windows, threatened reporters and healthcare workers and abused racial minorities.

Sloly said police would implement a “surge and containment” strategy, including a reinforcement of 150 officers deployed downtown, to restore order.

“The hatred, violence, unlawful acts that residences and businesses in Ottawa have endured over the past week are unacceptable,” he said.

Blockages are also planned in Quebec and Toronto, where authorities have closed access to downtown areas.

The protest is dividing the official opposition Conservative Party, which this week ousted its leader amid complaints he had failed to back truckers enough.