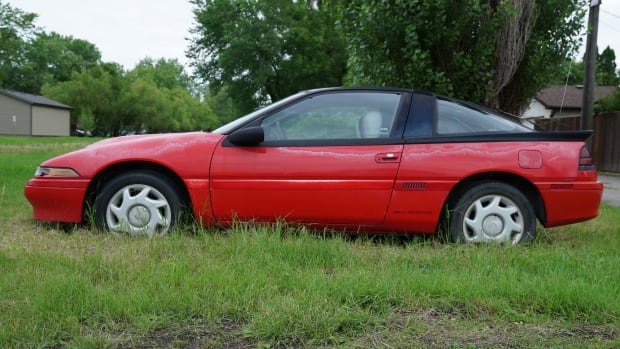 A car left sitting for years on a grassy lot behind a house in Winnipeg’s River Heights neighborhood has become a “scourge” on neighboring properties, according to a Winnipeg resident.

“There’s grass all the way to the windows, depending on the time of year, completely flat tires – it hasn’t moved in eight years, and I’m stunned that no one seems to care,” said Michael Gillespie.

He represents a company that owns a house on Centennial Street, just north of Grant Avenue and east of Kenaston Boulevard. Across an alley from the house is a grassy field where the car – a two-door red Eagle Talon – sat for years.

Gillespie’s company bought the house in April and he says the previous owner didn’t know who owned the car.

A search of Google Street View images, dating back as far as 2014, shows the vehicle parked in the same location. The license plate sticker indicates that it was registered in 2012.

The car’s tires are now punctured, its mirrors and headlights are broken, and the wheels have sunk into the ground.

The land where the car is located – an old railway line – has no address, but is registered as private property. CBC News attempted to contact the owner, but did not immediately receive a response.

Gillespie reported the vehicle twice to the City of Winnipeg’s 311 service, requesting that it be declared abandoned under the Neighborhood habitability by-law. Both times he says his report was closed without any explanation, and apparently no action was taken.

A city spokesperson said by-law enforcement officers are still investigating whether the car meets the definition of an abandoned vehicle.

According to the rules, there are three criteria:

At its June meeting, Winnipeg City Council passed a by-law amendment that aims to make it easier for the city to remove abandoned vehicles.

Previously, the regulations stipulated that vehicles had to be left outside for at least a month. This caused long delays for the city to remove the vehicles, Waverley West Coun said. Janice Lukes, who proposed the amendment.

The case of the vehicle Gillespie complained about shows why the amendment was needed, Lukes said, and the city should withdraw it.

“It’s a dead vehicle in the middle of a field. It just shouldn’t be there,” she said in an interview with CBC.

Gillespie says he received conflicting explanations as to why the vehicle was not removed. No matter who it belongs to or why it was left there, he wants it gone.

“Obviously the city is unable to do anything these days,” he said.

“Maybe [they] … do not have enough staff. Maybe nobody wants to talk on the phone to disgruntled citizens, but it seems like a very simple thing. And that’s just disgusting.”