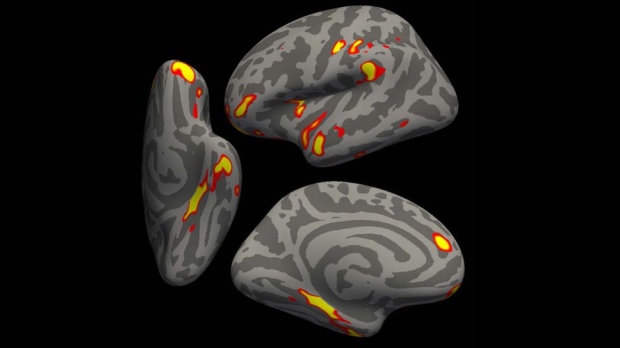 COVID-19 may shrink certain regions of the brain: British study

Certain regions of the human brain can shrink after a person has caught COVID-19, according to the first study to use brain scans to show a “before and after” look at the brain after infection.

A new British study published Monday in Nature magazine found that there is greater tissue damage and shrinkage in the brains of those who had even mild cases of COVID-19, with most of the changes related to areas of the brain related to smell.

It’s not yet clear whether these effects are permanent or will improve over time, or what they might mean for overall brain health or function, with the researchers noting that some brain loss occurs with age.

In an attempt to gauge the impact of COVID-19, the researchers looked at brain changes in 785 people aged 51 to 81 who had undergone two brain scans and the accompanying cognitive tests.

The key piece of data is that 401 participants contracted COVID-19 after their first scan and before their second scan, which helped to see if imaging would show greater changes in the brains of these participants.

Compared to those who had not contracted COVID-19, brain scans of participants who had contracted the virus showed greater reduction in gray matter in the brain, particularly in the orbitofrontal cortex and parahippocampal gyrus, which are associated with smell.

The orbitofrontal cortex is also linked to decision-making processes and emotional and social behavior, while the left parahippocampal gyrus is described in the study as “a limbic region of the brain that plays a crucial and integrative role for the temporal order relative of events”. in episodic memory.

Among participants who had contracted COVID-19, brain changes ranged from 0.2% to 2% more changes than those without prior COVID-19 infection.

Between January 2021 and February 2022, the project asked participants who had received imaging exams before the pandemic to return for more imaging to help track the long-term effect of the virus on internal organs.

It was this move that made it possible to trace the participants who had received scanners before and during the pandemic.

Previous research has shown that COVID-19 can affect the brain, with many researchers pointing out that common symptoms such as loss of taste or smell have neurological impacts. But many studies looking at brain damage in COVID-19 cases have focused on those who had severe cases of the virus that required hospitalization.

In this study, only 15 of the 401 cases were severe cases of COVID-19 requiring hospitalization.

“Using the UK Biobank resource, we were in a unique position to examine the changes that occurred in the brain following mild – as opposed to more moderate or severe – infection with SARS-CoV-2” , Gwenaelle Douaud, professor at the University of Oxford and lead author of the study, said in a statement.

“Although the infection was mild for 96% of our participants, we found greater loss of gray matter volume and greater tissue damage in infected participants, on average 4.5 months after infection. They also showed a greater decrease in their mental abilities to perform complex tasks, and this mental worsening was partly linked to these brain abnormalities. All of these negative effects were more marked at older ages. A key question for future brain imaging studies is to see if this brain tissue damage resolves in the longer term.

In this study, the researchers matched the 401 cases with 384 participants who had received both scans but had not contracted COVID-19, to serve as a control group with similar demographic characteristics.

All of the participants who contracted COVID-19 in the research cohort did so between March 2020 and April 2021, a time when many variants, but not Omicron, were active.

The first and second scans were spaced about three years apart on average, and the second scan took place as early as a month after COVID-19 infection for some participants, and as late as six months after for others.

The researchers found no significant difference in the results of the second analyzes based on the time elapsed after the participant contracted COVID-19.

The majority of tissue damage and changes in gray matter thickness were linked to regions of the brain that deal at least in part with the olfactory system, but the researchers said the impacts could extend beyond these. regions.

“While the greatest atrophy of SARS-CoV-2 positive participants was localized to a few regions, mainly limbic, the increase in [cerebrospinal fluid] whole-brain volume and decrease in volume suggests an additional diffuse loss of gray matter superimposed on the more regional effects seen in areas related to olfaction,” the study states.

Those who were infected but had mostly mild symptoms in the study cohort showed no signs of impaired memory, but showed worsening executive function, which was revealed across six cognitive tasks that the participants had to do.

When participants took a common test linking numbers that is sometimes used as a screening tool for dementia, called the Trail Making Test, those who had been infected with COVID-19 took “significantly” longer to complete the test, according to the study.

“Significantly greater cognitive decline, which persisted even after the exclusion of hospitalized patients, was observed in the SARS-CoV-2 positive group between the two time points, and this decline was associated with greater atrophy of crus II, a cognitive lobule of the cerebellum,” the study said, referring to a subsection of the cerebellum, a part at the back of the brain that coordinates physical movement.

Although these impacts on the brain may seem frightening, the study noted that the structural changes were “modest”, saying that if there was an “additional loss in infected participants of an average of 0.7% in the regions olfaction-related brain damage”, this should be analyzed knowing that we know that brain loss also occurs naturally, with older people who live alone experiencing a loss of hippocampal volume of 0.3% per year.

However, being able to measure whether the virus is associated with additional changes in the brain that might not have been observed otherwise is extremely valuable for further research and potentially therapeutic solutions.

It could also potentially shed light on the lingering symptoms that plague those with long COVID, including persistent brain fog and fatigue, though more research is needed.

Stephen Smith, a professor at the University of Oxford and lead author of the study, said in the press release that being able to look at scans of the same person taken before contracting COVID-19 gave them a unique chance to assess with greater certainty. the impact of the virus.

“The fact that we have the pre-infection scan helps us distinguish infection-related brain changes from differences that may have pre-existed in their brains,” Smith said.

“The UK Biobank COVID-19 Repeat Imaging study is the only study in the world able to demonstrate ‘before vs after’ changes in the brain associated with SARS-CoV-2 infection”, Professor and Scientist Naomi Allen chief at UK Biobank, added in the statement.

“Collecting a second set of multi-organ imaging scans from some people who had been infected with SARS-CoV-2 and others who had not been infected generated a unique resource to enable scientists to understand how the virus affects internal organs.”

Although the researchers have made efforts to investigate potentially confounding causes, including assessing whether the flu that occurred between the first and second scans was associated with brain findings, they also acknowledge that since it s This is an observational study, they cannot say with complete certainty that the brain changes were caused solely by COVID-19.

“Our statistics also represent an average effect; not all infected participants will show longitudinal brain abnormalities,” the study states.