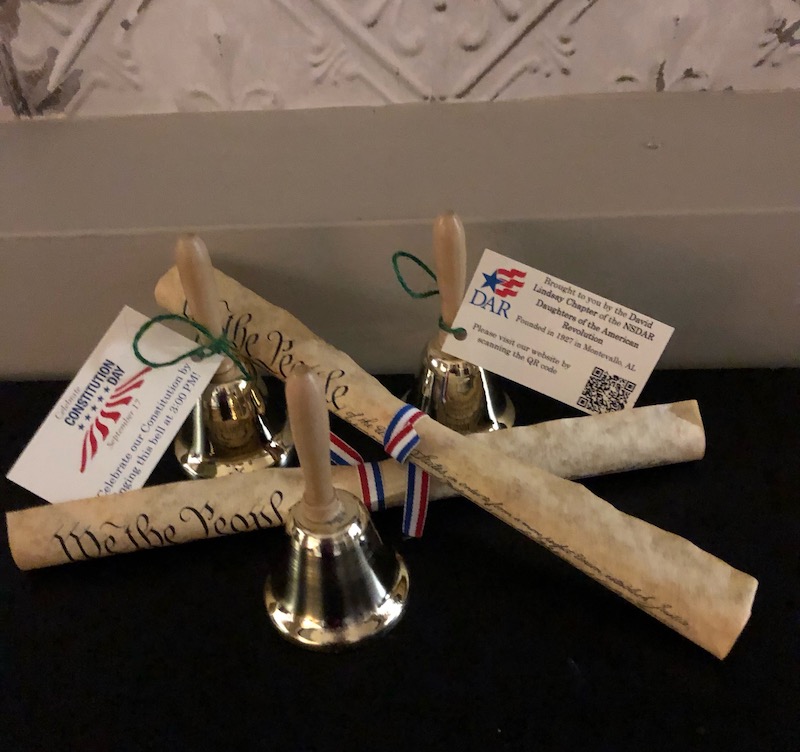 DAR will ring the bells for Constitution Week

The local David Lindsay Chapter of the Daughters of the American Revolution began its annual September meeting with Chapter Registrar Judith Kennedy Arthur inducting three of its members, Mary Harris, Elizabeth Cook and Senator April Weaver. Everyone received a rose with their new membership package.

All inductees have an American patriot who fought in the American Revolution. Senator April Weaver’s Patriot is the chapter’s namesake (David Lindsay) who is buried in Maylene, the site of his historic cemetery on the property he purchased when his family first settled in Shelby County.

Chapter regent Stella Tipton said she was working with others to explore an exciting idea for the development of a patriotic trail that would map historic sites such as David Lindsay’s historic grave and other historic treasures such as the George Washington Museum in Columbiana.

“We have such a young nation, and the timing to complete a project of this magnitude would be truly meaningful,” said Tipton, “if we can start now and finish it before we celebrate our 250th anniversary on July 4, 2026.”

Tipton said the idea came to her while she was laying out the grave site in May.

“National DAR supports such projects with small grants to help local chapters, like ours,” Tipton said. “We will see where it leads. Hopefully something we can all be proud of here in Shelby County.

“It was a real special honor to have all eleven members of our legislative delegation here in Shelby County sign the Constitution Week Proclamation,” Tipton said. “Our chapter has celebrated Constitution Week here in Shelby County since 1955-56. We were privileged to receive the Proclamation presented by Senator Weaver. The Legislative Delegation Proclamation encourages all citizens to recognize and appreciate the importance of this enduring document to our nation and to reaffirm our commitment to the rights and responsibilities of citizenship in this great nation.

The chapter also enjoyed a presentation from Mary Harris as she donated a book on the constitution to the Columbiana Library where the chapter meets.

Chapter members received a special bell at the September meeting and will ring them this Saturday, September 17 at 4 p.m. sharp in Shelby County. Many other members of the Daughters of the American Revolution will also gather across the country to ring the bells, just as the church bells of Philadelphia rang when the constitution was signed in 1787.

The Chapter invites everyone to join Constitutional Chairperson Jenny Mumpower next week as she visits various Shelby County libraries dressed in her period costume, helping elementary school children learn about the constitution through interactive programs.

“We’re so proud of Jenny,” Tipton said. “She and our former regent, Phoebe Robinson, did so much to pave the way for our chapter’s focus on educating our younger generation, not only about our founding fathers, but also about the constitution.”

Visit Davidlindsaynsdar.weebly.com to join or visit the chapter.