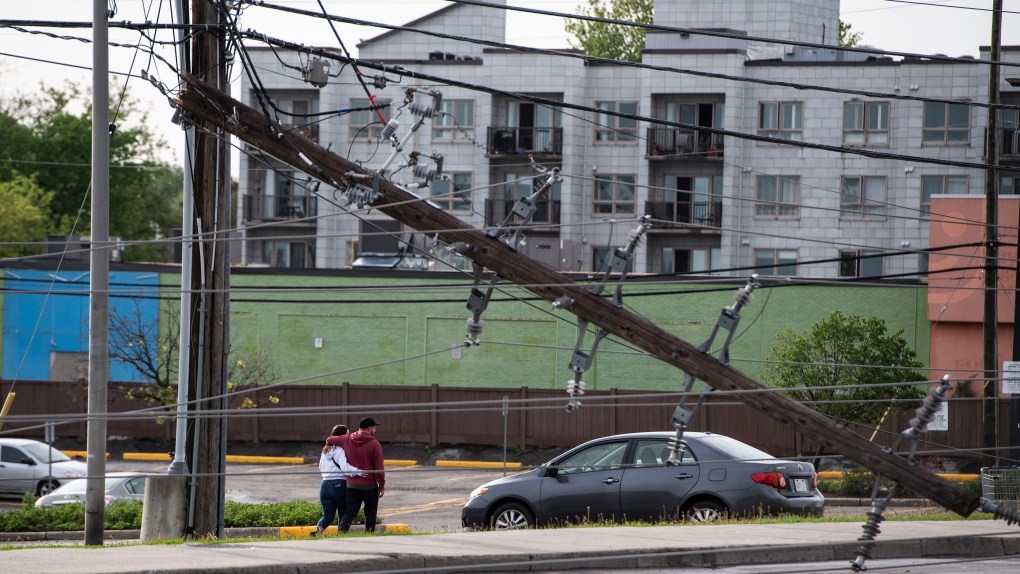 Electric poles: where do they come from?

A week after the devastating storm in southern Ontario and Quebec, communities in the affected areas are still reeling from the damage, with some residents going eight days and count without being able.

Hydro One, which serves rural Ontario and is the province’s largest utility, says 1,900 poles were damaged in the storm. Hydro-Quebec officials said 500 poles in the province need to be replaced. And in the nation’s capital, the storm damaged 300 poles, according to Hydro Ottawa.

Replacement poles will have to come from somewhere, and utility companies typically rely on two different types of poles that support the overhead power lines that provide electricity to our communities.

Utility agencies usually have a mix of wooden utility poles as well as poles made of composite materials. Hydro One says it sources its wood poles from Stella Jones, an Ontario supplier, while Hydro Ottawa Springs the vast majority of its poles come from cedars and pines grown in Western Canada.

“These poles are prized across North America for their balanced characteristics of durability, longevity and cost-effectiveness,” Josée Larocque, head of media and public affairs at Hydro Ottawa, told CTVNews.ca in an email Friday. .

Utility companies have relied on wooden poles for nearly two centuries because it is a low conductivity material and has a low tendency to expand under heat. Wooden poles are also an eco-friendly choice, as they can easily be recycled.

But in ditches, rough terrain, and wet, swampy areas that pose a structural challenge to wooden poles, utility companies are opting for composite poles, made from fiberglass and coated with resin and UV protection. . Hydro Ottawa says its composite poles are made in Ontario and can last up to 80 years, twice as long as wooden poles.

“They also have a high strength-to-weight ratio, which means they can be used in areas that can’t support a wooden post…and they resist both rot and woodpecker damage” , said Larocque.

Hydro One says it typically keeps a supply of poles and other infrastructure to prepare for adverse weather events, but the severity of last weekend’s storm forced the agency to quickly stock up on additional supplies. .

“We are working with many great partners who have stepped up to provide us with the products we need to restore customers in affected areas. Our suppliers have played a big role in our ability to restore power so quickly for the vast majority customers and we want to thank them for all they have done and continue to do,” Hydro One spokesman Richard Francella said in a statement emailed to CTVNews.ca on Friday.

THE NEED FOR RESILIENT INFRASTRUCTURE

As scientists warn that storms like last weekend’s will only get stronger, longer and more frequent thanks to the effects of climate change, questions have been raised about whether existing power grid infrastructure is ready.

“The grid we designed for today, we used data from the last 100 years,” electrical infrastructure expert Andrew Phillips told CTVNews.ca in a video interview Thursday. “Unfortunately, due to climate change, the past is not a good predictor of the future.”

But there are alternatives to the wood and composite poles currently in use that may be more storm resistant. Phillips, who is the vice president of transmission and distribution infrastructure in Charlotte, North Carolina. Electric Power Research Institute (EPRI), points out that in Florida, which experiences tropical storms or hurricanes every year, utility poles are usually made of concrete or steel.

These poles can withstand significantly higher wind speeds than wooden poles, but Phillips says they’re much heavier, more expensive, and more difficult to install and repair.

Utility companies in many European and Asian countries have chosen to bury their power lines underground, but this option also has cost and repair disadvantages.

“It’s expensive to do, but of course… it also has the downside that if a failure occurs, recovery can take a very, very long time,” Phillips said.

But Phillips says we shouldn’t write off wooden poles entirely, given that wood is a renewable resource with a much lower carbon footprint than concrete, steel or composite options.

“Concrete poles, steel poles and even composite poles all have a carbon footprint…while wooden poles are sort of carbon neutral because they have grown out of the ground like trees. So there is has a small push in Europe to go back to wood poles due to carbon neutrality,” he said.

Phillips says design changes can potentially extend the longevity of wooden posts. For example, EPRI researchers have developed a type of wooden electric pole that could better withstand extreme weather events. In the event of a storm, only the crossbeam would break, or the wires would slip, rather than breaking the post itself.

“When a wooden pole is broken, it will take you 36 hours (to fix it). But if you find a broken crossbeam on top, or a conductor that has just slipped in its footing, it can take three or four hours. And that can really speed up recovery,” Phillips said.

Phillips says it’s imperative that policymakers start thinking now about how to build a climate-resilient power grid, whether that means designing stronger infrastructure to withstand extreme weather events or creating infrastructure that can be repaired faster.

“We really have to think about what the future will look like. Obviously nobody has a crystal ball, but the climate models are getting better and better,” he said. “We shouldn’t wait until then to design infrastructure that can withstand these events. We should think now.”