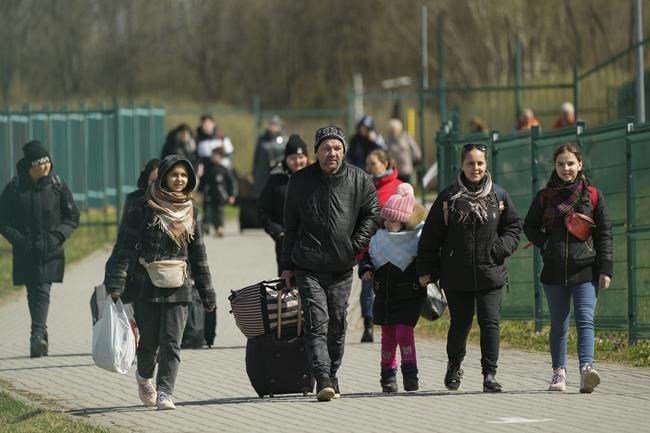 OTTAWA — The federal government is exempting more Ukrainians fleeing the Russian invasion from providing biometrics before coming to Canada.

OTTAWA — The federal government is exempting more Ukrainians fleeing the Russian invasion from providing biometrics before coming to Canada.

This is one of several measures the government announced on Saturday to make it easier to access Canada-Ukraine clearance for emergency travel.

Immigration Minister Sean Fraser has said Canada will not require biometrics from people under 18, over 60 and those who have already obtained Canadian visas and have not no immigration problems.

Previously, in these cases, it was left to the “decision maker’s discretion” whether or not to collect biometric data – fingerprints and a photo.

Fraser said the government was taking steps to “reduce pressure on the collection of biometric data”.

Fraser said Canada has already approved more than 30,000 applications under the program.

He said his department is also working to facilitate travel for those who may not have travel documents.

“This means that for family members of Canadian citizens and permanent residents currently residing in Ukraine who do not hold valid travel documents, IRCC may issue one-way travel documents on an exceptional basis to facilitate their travel to Canada” , Mr. Fraser said.

He said his department had recently announced it was expanding settlement supports to provide access to key services for settling in new communities, such as language training, information about life in Canada, information on how to enroll children in school and employment assistance.

Transport Minister Omar Alghabra said his department was working with Canadian airlines to arrange the flights, but details have not been finalized. He said many affected Ukrainians are spread over a wide area and some are not yet ready to leave.

“No one should be forced to flee their homes and we are committed to helping Ukrainians who have had to leave their country because of this illegal war,” Alghabra said.

“As Canadians, we will do what we do best. We will stand up for Ukrainians and welcome them warmly as they adjust to new life here in their new country,” he added.

In addition, Ukrainians arriving in Canada will be entitled to two weeks of temporary hotel accommodation and up to six weeks of income support.

Fraser said income support will be $500 a week. He said many of those arriving have family or other ties to Canada, so it’s unclear how many will need temporary accommodation.

Speaking at a global social media rally, the Prime Minister also announced an additional $100 million in humanitarian aid to respond to the crisis in Ukraine and neighboring countries.

“Whether it’s food, water, shelter or medical aid, we will continue to support you and provide you with the assistance you need at this time,” Trudeau said in a statement. . “We defend Ukraine.”

With Saturday’s announcement, Canada has provided $245 million in humanitarian assistance to Ukraine. Of this amount, $145 million was allocated to United Nations organizations, the Red Cross Movement and non-governmental organizations.

“This is all happening very quickly and more details will be available in the days and weeks to come as these new measures begin to take effect,” Fraser said. “I am confident, however, that the steps we are taking today demonstrate our continued and determined support for the people of Ukraine.”

This report from The Canadian Press was first published on April 9, 2022.

– By Kevin Bissett in Fredericton.