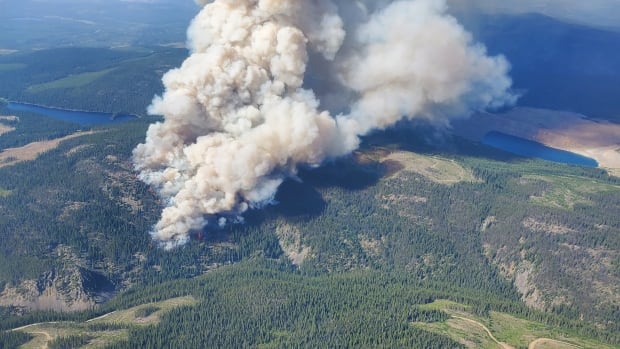 Growing numbers of B.C. residents have been ordered to leave their homes as wildfires rage

More than 1,500 properties in the Cariboo region of British Columbia are subject to evacuation orders issued Wednesday due to forest fires in the area, while further fires threaten communities in Ashcroft and of Cache Creek.

The Cariboo Regional District on Wednesday issued an order for 1,074 properties in the Flat Lake area in Green Lake, south of 100 Mile House. Another order is for 482 properties east, from Canim Lake to Mahood Lake.

“Due to the immediate danger to the safety of people from a fire, members of the RCMP or other groups will accelerate this action,” the district said.

The entire community of 100 Mile House and residents of the neighboring Horse Lake area are now on evacuation alert. There are approximately 2,000 people living within 100 Mile. The Horse Lake newsletter covers 3,086 properties.

Residents of these areas are requested to be prepared to leave their homes at all times. Interior Health said it has started moving a small number of patients with complex needs from the 100 Mile District General Hospital as the threat of a wildfire persists, but the hospital is otherwise functioning normally.

There are seven wildfires of note in the Cariboo region. The largest are around Flat Lake and Canim Lake.

Fire chief information officer Erin Bull said conditions in the area are not expected to improve in the coming days.

â€œWe expect the same warm weather and the same windy conditions, so the expected behavior of the fires continues to be quite aggressive,â€ she told CBC News.

Just south, residents of 50 properties southeast of Ashcroft were ordered to leave their homes Wednesday night due to a growing wildfire near Barnes Creek.

Parts of and surrounding Ashcroft, the entire village of Cache Creek and the Ashcroft Indian Band reservation are also on high alert.

To the north, in the Bulkley-Nechako Regional District, another evacuation order remains in effect near Fort St. James due to a forest fire near Camsell Lake. It includes the Yekooche First Nation reserves and parts of Rubyrock Lake Provincial Park and Sutherland River Park.

The BC Wildfire Service says much of the central part of the province is at extreme risk of wildfires, with more than 300 fires across British Columbia. Two dozen across the province are highly visible or pose a potential threat to public safety.

Helicopter to assist with evacuations

Major highways remain closed in the province on Wednesday, including Highway 97 north of 70 Mile House and Highway 20 in the Lake Anahim area. The latter is the only road crossing the Chilcotin region of British Columbia.

The blaze, known as the Big Stick Lake blaze, jumped onto Highway 20 on Tuesday afternoon, according to the Ulkatcho First Nation. With the road closed, a military helicopter was dispatched to Anahim Lake Airport to help evacuees out of the area.

Meanwhile, to the south, evacuation orders issued Tuesday night for the Kamloops area are still in effect. Orders cover over 180 properties in the city, including areas near Savona and Copper Creek.

Nearly 200 properties in the Barnes Lake area east of Kamloops are on alert Wednesday.

The responsible blaze, known as the Sparks Lake Fire, covers approximately 402 square kilometers. There were reports of buildings damaged or destroyed by the flames, but the Thompson-Nicola Regional District was unable to verify the damage.

All the smoke from the forest fires in the Kamloops area dramatically deteriorated the air quality. By mid-afternoon, the Air Quality Health Index had reached “very high” risk levels, meaning strenuous outdoor activities should be avoided.

North of Lytton, an order is in place for 17 properties in the Gladwin Mobile Home Park and the Jade Springs area, east of the village, due to the Lytton Creek Forest Fire.

Much of central and eastern British Columbia is the subject of a special weather report warning of smoky skies, as hundreds of wildfires rage uncontrollably across the province.

Environment Canada has issued the Special Air Quality Statement, warning of smoke for the next few days in areas stretching from the interior north to the Yukon and east to the border of Alberta.

Doug Lundquist, a meteorologist with the Meteorological Service of Canada, said residents of British Columbia should be prepared for the smoky skies to linger until fall.

â€œWe’re going to see this for months,â€ he said in an interview. â€œThere’s smoke everywhere, from Alaska to Mexico. All we need … is for the wind to go in the wrong direction and bring it back from other places.â€

Several areas of the province are also subject to a heat warning, including the Fraser Canyon, where the village of Lytton was destroyed by fire last month, with forecast daytime peaks of up to 38 Â° C.

The province is asking residents to remain cautious and be responsible in preventing possible fires, after the Kamloops Forest Fire Department, RCMP and firefighters responded to five suspicious fires on Tuesday evening. It is believed that all of them were caused by man.

Anyone placed under an evacuation order must leave the area immediately.

Evacuation centers have been set up across the province to help anyone evacuated from a community threatened by a forest fire. To find the center closest to you, visit the Emergency Management BC website.

Evacuees are encouraged to register online with emergency support services, whether or not they are accessing the services of an evacuation center.

Austin and San Antonio to Compete for Best Taco Town