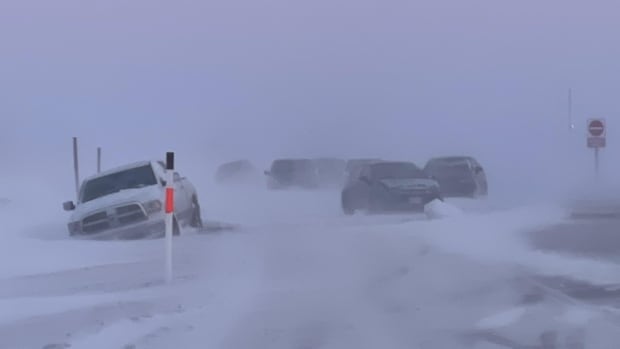 ‘I won’t do this again,’ says B.C. driver stuck in car for 13 hours during ‘horrific’ blizzard in Manitoba

Murray Hawse is used to a lot of snow back home in northern British Columbia, but nothing prepared him for the whiteout conditions that forced him and other riders into the ditches and on highway shoulders on Tuesday.

“In northern British Columbia, we have heavy snow, but we don’t have wind and drift [snow] like this,” Hawse said Wednesday morning.

“That whiteout, it was just awful. It was a weird feeling trying to drive.”

Hawse spent 13 hours waiting for whiteout conditions on Tuesday during a blizzard that forced many highways in southern Manitoba to close.

Despite poor visibility in the morning, it was not clear to Hawse when he emerged from his hotel in Headingley, just west of Winnipeg, that the conditions were impassable.

At first glance from his room, Hawse thought he could get by in his all-wheel-drive vehicle with studded winter tires.

As he walked to the vehicle, high winds blew his hat off his head and 100 yards across the parking lot. By the time he was on the highway, he had doubts.

“I could hardly see anything,” he said. “There were already cars in the ditch.”

Hawse started looking for a place to turn around and return to the hotel, but he could hardly see anything.

Driving about 10 kilometers per hour, Hawse only traveled a few kilometers on the Trans-Canada Highway before passing a woman in a vehicle stuck in the ditch. He slowed down, thinking he was going to help her.

“Next thing I know I got sucked into the ditch too,” he said.

Sections of the Trans-Canada Highway were gradually closed until more than 400 kilometers were closed, from Highway 11 east of Winnipeg to the Saskatchewan border.

Hawse called BCAA to report he was stuck. An operator informed him that it might take some time for him to get help, as CAA Manitoba was receiving many similar reports.

He could barely see past the front of his vehicle, but at the time Hawse wasn’t that worried. He had plenty of fuel, two jackets, winter boots, warm socks, food and water—all he needed for a while.

A driver stopped to check in with him around 10:30 a.m. Hawse told him to continue, assuming assistance would arrive soon.

As the hours passed, he felt less and less sure.

Hawse eventually realized that the occupants of the other nine vehicles stuck on the freeway around him had all been picked up and left their vehicles.

He was the only one left.

“I went through emotions from ‘Oh man, that was a stupid mistake’ – which it was, I shouldn’t have stayed put – to ‘Now I have to get out of this and hopefully it will subside.”

In the evening, when it was getting dark, Hawse turned on his headlights. This caught the attention of a truck driver heading east on Highway 1.

“Ironically, it was the same gentleman… [from] in the morning, and he said, ‘Are you still there?'”

The man took him back to the Headingley Hotel, 13 hours after Hawse got stuck. Along the way, Hawse estimates he saw hundreds of vehicles stuck on the Trans-Canada Highway.

A spokesperson for the Manitoba branch of the Canadian Automobile Association said Hawse’s case was “a really difficult situation” which was helped by him being prepared with emergency supplies when he hit the road.

“We were dealing with a number of people in this situation. So the first thing we do is make sure our member is warm, has food and water, is safe” , said Heather Mack.

The roadside assistance program received about 780 calls for help from drivers across the province on Tuesday, more than 400 of whom were people stuck in snow, she said.

While that’s “not a terribly outrageous number” for the CAA to handle in blizzard conditions, Mack said other factors slowed response times.

“At this point we need to work with local police to arrange… when it is appropriate for us to pick up vehicles.”

The average wait time on Tuesday for vehicles stuck on peripheral or Trans-Canada highways was about six hours, she said.

People who needed a tow in Winnipeg had to wait just over an hour and a half. The wait was about 45 minutes for those calling with battery issues.

While calls dwindled overnight, about 40 cases could only be processed Wednesday morning, a “significant number” of which were likely people stuck on the Winnipeg Perimeter Highway, Mack said.

RCMP said there were more than 100 vehicles stuck just on this Winnipeg bypass.

Hawse was among those unable to retrieve his vehicle Tuesday evening, but he did pick it up Wednesday morning. It was a little frozen, but he was back on the road to get home before noon.

He said he was glad to be safe and would think twice before facing a blizzard again.

“People should know that when you have such conditions, they say if you don’t need to drive, don’t. You should listen,” he said.

“Luckily I’m fine, and mistakes are mistakes, but I won’t do it again.”