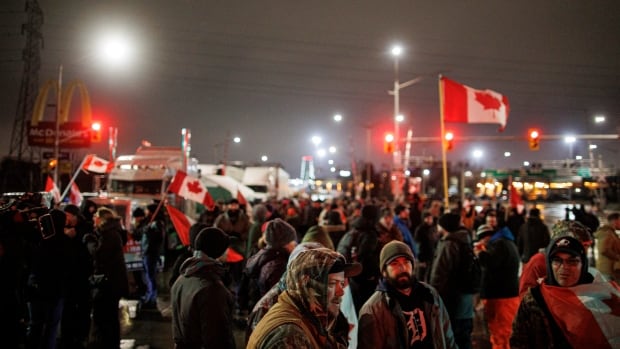 As one of two people charged with organizing the blockade of the Ambassador Bridge, William Laframboise said he would appear in court to prove his innocence.

Laframboise, 41, and Nycole Dicredico, 42, made their first court appearances today. They were charged with mischief in July and tagged by Windsor Police as two people who led the blockade. Access to the Ambassador Bridge – a key border crossing into the United States – was blocked on the evening of February 7 by truckers and others protesting mask mandates. Police officers from across Canada extricated him on February 13.

Laframboise told CBC News he was at the protests in Ottawa when the blockade in Windsor began. He said he was part of the Ambassador Bridge protest, but said in court that he did not organize it.

When Windsor police identified the two as the ringleaders in an investigation, they did not say what information led them to that conclusion. However, investigators said Laframboise and Dicredico were the drivers of two vehicles blocking traffic on Huron Church Road and Tecumseh Road East.

Laframboise said he did not know Dicredico and only spoke to him during a blockade day. He said he mostly chatted with her inside his truck to take advantage of Dicredico’s heated seats on a cold winter day.

Dicredico declined to comment, saying she had hired an attorney.

Laframboise said that since he was charged, people have damaged his property and made death threats against him and his family.

“I’m going to represent myself and I want a court date as soon as possible,” Laframboise said in court.

However, his next court appearance is scheduled for October because he needs a legal trial without a lawyer.

The balkanization of Canada is a real possibility under Trudeau