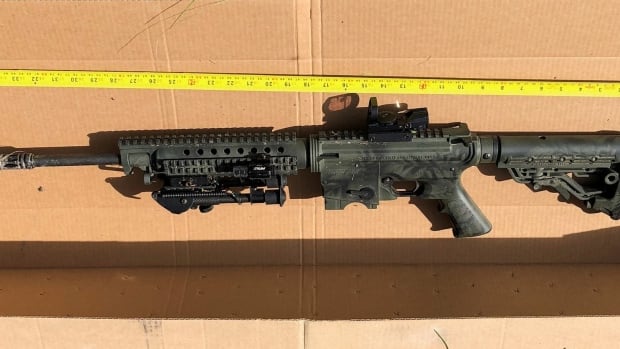 The province’s police watchdog is investigating two encounters the RCMP had with a 29-year-old man near High Prairie, Alta., During a 24-hour manhunt that began on Thursday morning and left the suspect and a police dog dead.

The incident began around 11 a.m. Thursday when a man driving a red Cadillac fled from an attempted RCMP traffic stop, ASIRT said in a statement.

About 30 minutes later, another RCMP unit located the suspect’s vehicle stuck in mud and partially covered with a blanket in the area of â€‹â€‹Winagami Lake Provincial Park, near Range Road 175 and Highway 679. The vehicle was unoccupied and police found three ammunition and identification documents belonging to the man inside.

Two more officers and a police dog were called to the scene and the police dog detected a trail, leading the four officers east through a thick bush for about three to six kilometers in about two hours, said the ‘ASIRT.

When officers encountered Gray, he exchanged gunshots with police, ASIRT said. The RCMP service dog, named Jago, was struck and killed in this incident. None of the police officers were injured and Gray was reportedly unharmed during this encounter. The officers were taken from the area by a civilian search and rescue helicopter.

The ASIRT was called to investigate because the officers had unloaded their service weapons. Meanwhile, RCMP officers continued to search for Gray.

Members of the RCMP emergency response team were dispatched to the same area where the shooting took place and several police officers shot Gray and believed he had been shot. After trying to force Gray out of the thick bush, a physical search of the area revealed he had run away again.

Police encountered Gray two more times during the manhunt through dense brush for several hours and “gave him verbal orders” but did not shoot, ASIRT said.

The next day at approximately 11:45 am, two RCMP officers assigned to a perimeter containing the manhunt spotted Gray in a ditch east of Winagami Lake Provincial Park.

The officers clashed with Gray and the two officers shot Gray, who fell to the ground in the tall grass, ASIRT said. Medics called to the scene attempted to treat Gray, but he died at the scene. A loaded semi-automatic rifle and rangefinder were recovered from the scene.

ASIRT is also investigating a separate incident in Ardmore, Alta., After the RCMP shot dead a Cold Lake area man there on Sunday evening.