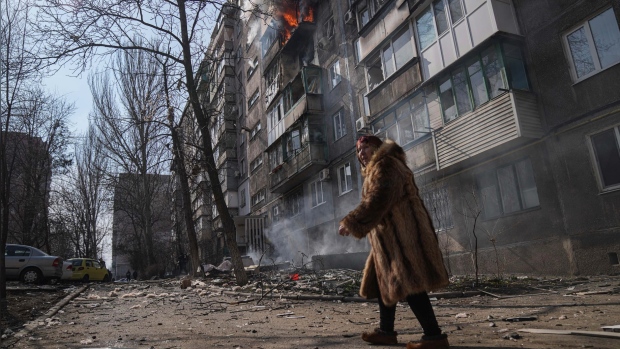 “Over the past week, several thousand residents of Mariupol have been deported to Russian territory,” the council said in a statement broadcast Saturday evening on its Telegram channel.

“The occupiers illegally took people from the Livoberezhniy neighborhood and the shelter to the sports club building, where more than a thousand people (mostly women and children) were hiding from the constant shelling.”

Reuters could not independently verify the claims.

Some 400,000 people have been stranded in Mariupol, on the Sea of ​​Azov, for more than two weeks, safe from heavy shelling that has cut central electricity, heat and water supplies, according to local authorities.

Russian news agency TASS reported on Saturday that 13 buses were moving towards Russia, carrying more than 350 people, of whom around 50 were to be taken by rail to the Yaroslavl region and the rest to temporary transition centers in Taganrog, a port city in Russia’s Rostov region.

Russia’s Defense Ministry said this month that Russia had prepared 200 buses to “evacuate” citizens from Mariupol.

The RIA Novosti agency, citing the emergency services, reported last week that nearly 300,000 people, including some 60,000 children, arrived in Russia from Lugansk and Donbass regions, including Mariupol, these last weeks.

The Russian Defense Ministry said this month that more than 2.6 million people in Ukraine had asked to be evacuated.

Reuters could not immediately verify this information.

Mariupol, a key link to the Black Sea, has been a target since the war began on February 24, when Russian President Vladimir Putin launched what he calls a “special military operation” to demilitarize and “denazify” the Ukraine. Ukraine and the West say Putin has launched an unprovoked war of aggression.

As Russia sought to seize most of Ukraine’s southern coast, Mariupol rose to prominence, lying between the Russian- annexed Crimean Peninsula to the west and the Donetsk region to east, which is partially controlled by pro-Russian separatists.

Are you in Ukraine? Do you have family in Ukraine? Are you or your family concerned? E-mail [email protected]