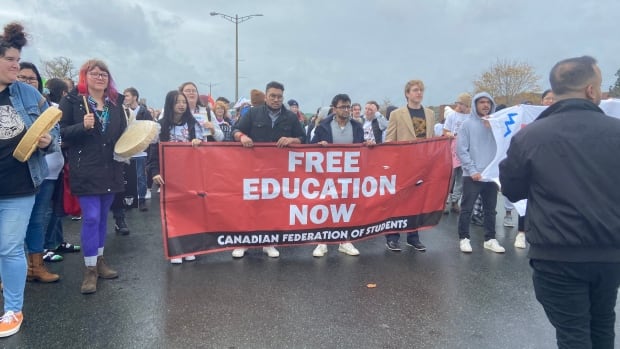 Memorial University students demonstrated on the east and west coasts of Newfoundland on Wednesday, demanding that the institution reinstate a tuition freeze.

Hundreds of students flooded the Grenfell campus in Corner Brook and the main MUN campus in St. John’s on a wet and windy Wednesday morning, chanting, “Students united will never be defeated.”

“We see people working two or three jobs just to be able to afford to go to school and that’s on top of a full-time school load. It is simply not acceptable. It’s really stressful,” Gaayathri Murugan, president of the Canadian Federation of Students in Newfoundland and Labrador, told CBC News on Wednesday.

Full-time tuition fees for students in the province were $2,550 a year during the freeze, among the lowest in Canada. Canadian students from out of province paid $3,330. Tuition for all students in Newfoundland and Canada is now $6,000 per year.

International students have also felt the brunt of tuition fee changes. Fees have soared to $20,000 a year, nearly double what they were during the freeze, but still below the national average of around $32,000.

Maria Dussan, who arrived as an international student from Colombia in 2013 and graduated in 2018, joined the protest in St. John’s for her family, who she says will not have the same opportunities than it due to higher tuition fees.

“It’s an injustice, especially for international students,” she said. “Education is a right for all and everyone should have access to education.”

“It affects their lives”

“Right now we see the fees are going to continually increase. Right now we want them to be frozen at what they are and roll back,” Feltham said.

“Due to rising tuition fees that incoming students are already facing, education is still not accessible.”

Jawad Chowdhury, executive director of advocacy for MUN’s student union in St. John’s, was one of the main organizers of Wednesday’s rally.

Chowdhury said students are fed up with tuition fees as they consider the rising cost of living.

When the crowd approached the steps of the Confederation Building, they forced their way to the doors, banging on the windows and shouting.

“Students have the biggest impact, especially marginalized international students living in poverty. They really feel the impact and it is almost impossible for students to maintain a regular life or choose between rent or food,” did he declare.

Chowdhury said students have a limited income and the cost of living, as well as rising tuition fees, is reflected in their studies.

“Students perform very poorly in school. It affects their lives,” he said.

In a statement to Radio-Canada, an MUN spokesperson said, “There are no plans to change the tuition fee decision.”

“Memorial fully supports the right of students to protest and express themselves freely on all of our campuses. The Senate encourages academic units and faculty to grant academic amnesty to all students on all campuses of Memorial University so that they may freely participate in the Provincial Education Strike without fear of academic repercussions,” we read in the press release.

Snow warning in effect for Calgary and surrounding areas