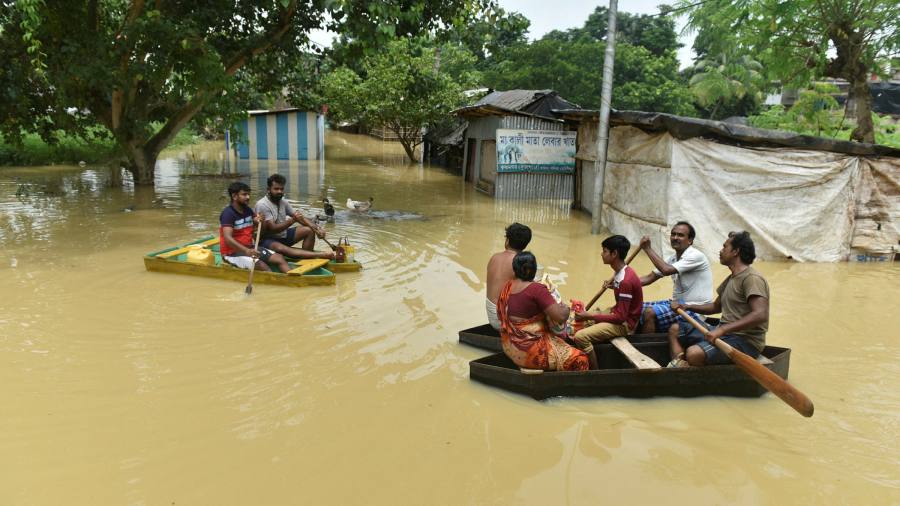 Migration will soon be the biggest climate challenge of our time

We will send you a MyFT Daily Summary email gathering the latest news on global migration every morning.

The writer is the author of ‘Move: How Mass Migration Will Reshape the World – and What It Means For You’

Climate change is approaching the point of no return. As the most recent report of the Intergovernmental Panel on Climate Change makes clear, even if carbon emissions were to stop tomorrow, those accumulated in the atmosphere would be enough to disrupt many of the planet’s ecosystems for decades to come. future.

This is why the upcoming COP26 summit, while necessary to promote climate change mitigation, is totally insufficient to address the equally important agenda facing humanity: adaptation.

While the heat, rising seas and drought make parts of the planet uninhabitable, millions or even billions of people may eventually have to relocate to the terrain at the latitudes best suited to survival. The most difficult challenge ahead is not to reduce emissions, it is to relocate people. Neither the IPCC nor any other agency is currently empowered to deal with this fundamental question of human geography.

In the post-war decades, relatively predictable migration patterns occurred both within and between regions. The largest stock of migrants moving in a region, for example, are the 23 million who crossed the borders of the former Soviet republics.

In the decades to come, however, the world will face several impending demographic imbalances. Labor shortages in North America, Europe and North Asia are worsening and these regions will have to turn on the immigration taps accordingly.

Tens of millions more Asians could be forced to relocate permanently across Eurasia as parts of Asia become uninhabitable and livelihoods dry up. Large numbers of South Asians and Chinese will drift north into the vast steppes of southern Russia and Kazakhstan, regions abundant in fertile land and almost completely unpopulated.

Some of this would have been likely even without climate change – but is almost certain because of it. During this century, we are expected to reach â€œhumanity’s peakâ€, our maximum species population of nearly 11 billion. From that point on, survival becomes a distribution game. How are we going to choose to organize ourselves in the 150 mÂ² of land on the planet? Is today’s map fit for purpose, given the number of people who have to move – and again – across different borders at different times?

When it comes to migration, national governments have sovereign power. But meeting the challenge of human geography requires more than tinkering with bilateral migration agreements.

We need to bridge the gap between the hypersensitized, short-term political discourse around migration and the collective strategy needed to shelter humanity. Talking about human geography rather than migration can be a powerful rhetorical tool, as it emphasizes that we are all in the same boat and gently shifts the emphasis from narrow national sovereignty to expansive planetary stewardship.

In a changing climate, we need a new division of labor between continents. South America and Africa will increasingly become regions of emigrants. North America and Eurasia must absorb more people, while recirculating them from the water-stressed southern United States and South Asia to more fertile inland areas. There will be climate pioneers who terraform new and difficult terrain in places like Canada and Russia for millions of future migrants.

Our political mapping will also evolve. The sinking of the South Pacific Islands will have to be abandoned for Australia and New Zealand, who will in effect become their protectorates within a collective Oceania rather than significant rulers. The countries of Visegrad currently under fiscal constraints and in depopulation could merge into a larger federation to better manage their forests, agriculture and vital rivers in order to prepare for a demographic replenishment by Arabs and Asians.

In a reversal of today’s centrifugal trends, the British Isles would not only deepen their resource sharing, but represent key hubs in a resurrected version of the medieval Hanseatic League of Trading Ports, connecting Churchill in Canada to Aberdeen, in Scotland and Kirkenes, Norway.

Many researchers ask themselves: what is there beyond sovereignty? If we are wise, the answer will be “programmable geography” – recoding places according to their changing roles in our fluid world system. Inhabitable geography is our most precious earthly resource, and we must optimize it for those who will follow us. Adapting sovereignty to a new reality is what we need in the future.