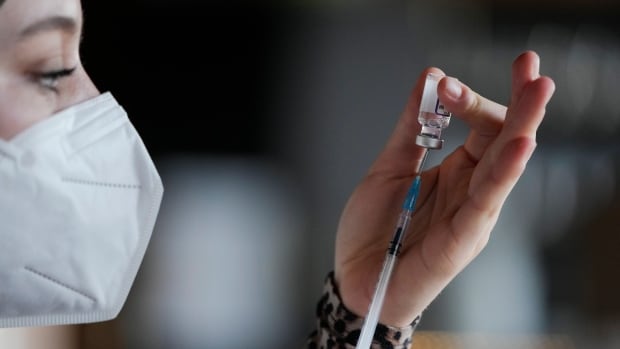 New Brunswick recorded two more COVID-related deaths Thursday and has no immediate plans to offer a fourth dose of a COVID-19 vaccine to the general population, the Department of Health said.

There are 88 people in hospital, down one from Wednesday, with six in intensive care, down two, and two of them on ventilators, down one.

Fourth doses are currently only available and recommended for immunocompromised New Brunswickers age 12 and older, if at least five months have passed since their third dose.

A full list of medical conditions and treatments that would cause a person to be considered moderately to severely immunocompromised is available online.

“There are no plans, at this time, to promote fourth doses for the general population,” said department spokeswoman Gail Harding.

“This is because third doses, or ‘booster’ doses, for those who are not immunocompromised, provide sufficient coverage against COVID-19 infection,” she said in an emailed statement. .

She did not immediately respond to questions about what will happen when the effectiveness of these doses decreases, or if another variant emerges.

New Brunswick is set to lift all COVID-19 restrictions, including mask mandates and gathering limits, on March 14 when the emergency order ends.

“New Brunswickers know the steps they need to take to avoid contracting COVID-19 themselves and to avoid spreading it to others who are at high risk of serious illness, hospitalization or death” , Harding said.

“Vaccination is key to reducing the spread and we believe the public understands the science and the benefits of vaccination.”

“New Brunswickers continue to show up, get their shots and get booster shots,” Harding said.

“Going forward, we will continue to promote the importance of vaccination and engage our stakeholders and community partners in promoting our vaccination efforts.” She did not specify.

Demand has “fallen off the cliff”

Paul Bowman, pharmacist and owner of Bowman’s Pharmasave in Fredericton, said he plans to “shut down” his vaccination clinic within the next two weeks.

“We’ve gotten to the stage where pretty much everyone who has wanted the vaccine has received their first, second, and if eligible, third dose,” he said.

Bowman plans to use the vaccines he has left, but won’t order any more because he fears they will expire.

Demand has “pretty much kind of fallen off the cliff” in recent days, he said, and it’s “pretty common across the board” in other pharmacy clinics as well.

Bowman suspects a combination of factors contributed to the decline in adoption, including the province announcing its intention on Feb. 24 to drop all restrictions.

“I’m sure it could play a bit,” he said. Some people “feel more comfortable now with the easing of public health restrictions.”

Pandemic fatigue is another. “A lot of people just want to move on and get on with their lives.”

Also, many cases of the Omicron variant have been “milder,” Bowman said. “So people aren’t as scared or worried about COVID, compared to what they might have been six months ago.”

They might know someone who got Omicron and didn’t get “obviously ill”, so they might think they don’t need their booster shot.

But Bowman encourages anyone who is eligible to get their booster, saying it helps prevent hospitalization and serious illness.

I think the pandemic has taught us not to look too far ahead because, you know, we’re working with the best information we have at the time.– Paul Bowman, Pharmacist

If demand picks up, he will order more vaccines. He doesn’t expect that to happen, he said, but notes that the future is hard to predict.

“I think the pandemic has taught us not to look too far ahead because, you know, we’re working with the best information we have at the time. When we got the first dose, I don’t think anyone was thinking about the third dose, and then it became commonplace.”

“It doesn’t look like a fourth dose is coming for the general population… But you know, who knows what the next six to 12 months has in store for us?”

For now, Bowman said it would be fine for his small pharmacy team to “catch their breath” and resume normal day-to-day activities.

“It was certainly busy, but it was nice to be able to do our part to keep New Brunswickers safe. »

Rod Russell, a professor of virology and immunology at Memorial University of Newfoundland and Labrador, thinks annual COVID boosters could be on the horizon, much like the annual flu shot.

This is because immunity is decreasing.

“We know that at least for a few months after your last shot, you know there may be some protection against actual infection, with Omicron, for example. But it’s pretty clear that three to six months after your shot , you know, you can get infected again,” he said.

Right now, people who have received three doses should have “pretty good protection” against any variants that may arise – “hopefully,” Russell said.

Vaccines have been less effective with Omicron than previous variants, but still provide protection.

“Even if there is a breakthrough of infection, even if you can get infected three or four months after getting your vaccine, there is no doubt that the immune response that you give to the vaccine is…by reducing the severity of the disease.”

Russell said in some ways it’s like we’re back to where we were a year ago with vaccination.

“Most people were going to be fine if they got infected. But we were all encouraged to get vaccinated to protect others. And we’re at it again now because vulnerable people are still vulnerable.”

Most COVID-related deaths are still among older people who “may not have responded so well to the vaccine,” he said.

And children under the age of five still can’t get vaccinated, although most seem to “get by” as long as they have a healthy immune system, Russell said.

“But some kids get sick, and that’s the thing that you as a parent, you know, you always worry about, well, what if your kid is the exception?”

Russell thinks part of the reason the vaccination rate could be low is that “a lot of people are just saying, ‘Well, I’ve got enough protection against two shots. I don’t need one. third to protect me.’

In his opinion, all eligible people should be reinforced to protect others, because as we move into the “learning to live with” phase of the pandemic, with the easing of restrictions across Canada, vulnerable people will become more vulnerable.

“I agree that we have to move on because this virus is not going away. We can’t keep hiding from it forever. … We have to get back to some sort of normal life,” he said, emphasizing negative mental health. impacts of lockdowns and restrictions.

“But I recognize and sympathize with people who are really vulnerable, or people who lived with vulnerable people in their family because, you know, I can see why they’re frustrated and they feel like they’ve been forgotten.”

Distribution of hospitalizations and cases

A person in their twenties is the youngest in intensive care. The others include two in their 40s, one in their 50s and two in their 60s.

There are now 528 healthcare workers on sick leave, in isolation after testing positive for COVID-19, an increase of seven. These include 288 with Horizon Health Network, 168 with Vitalité Health Network and 72 with Extra-Mural and Ambulance New Brunswick.

Public health on Wednesday confirmed 391 new cases of COVID-19 through PCR lab tests, bringing the number of active cases to 3,717 from 3,633.

A further 626 people said they tested positive on rapid tests.

New Brunswick has recorded 38,546 cases of COVID-19 since the start of the pandemic, with 34,519 recoveries so far and 308 COVID-related deaths.