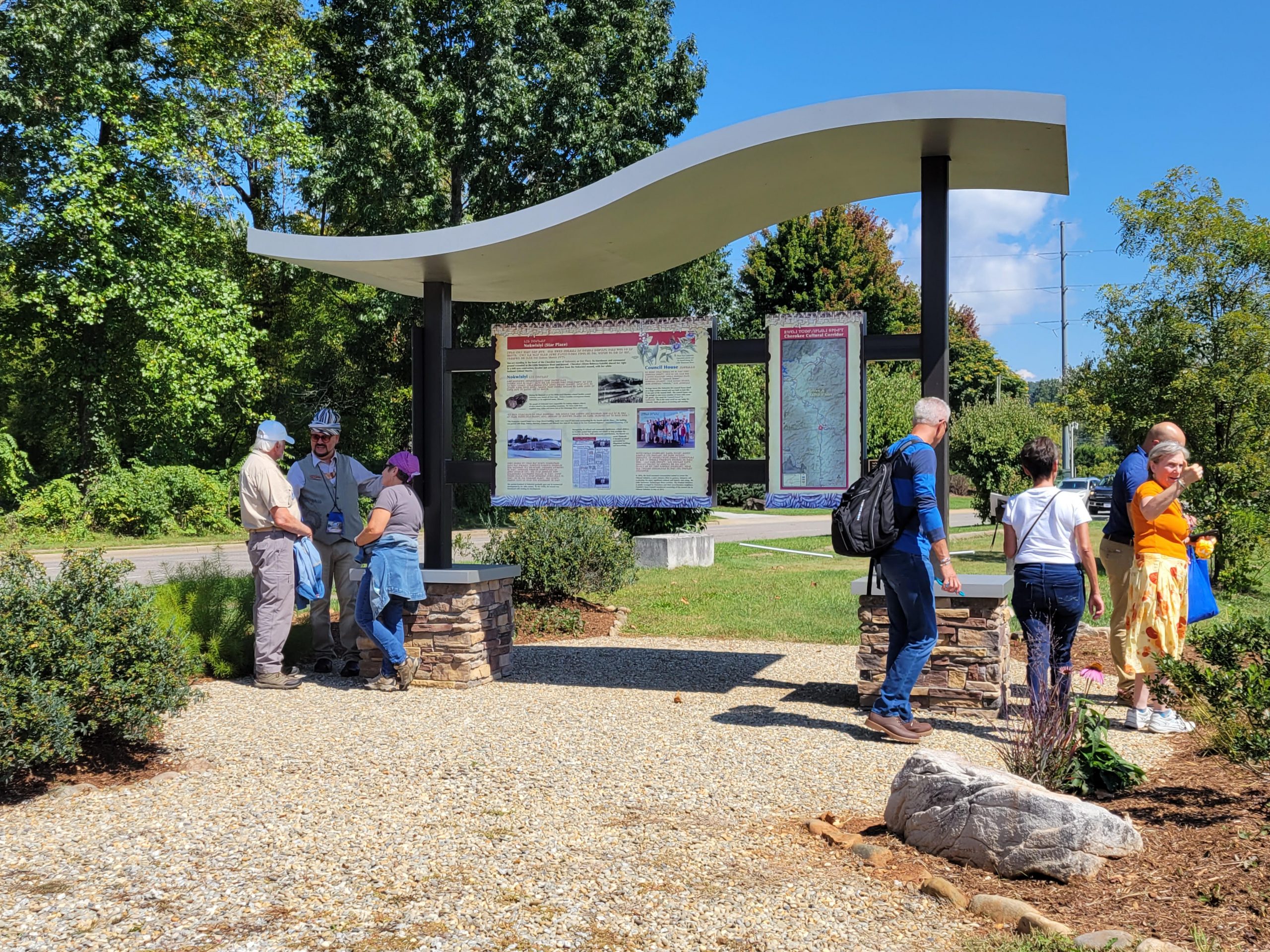 Participating in the pilgrimage were TOTA members from Alabama, Arkansas, Georgia, Illinois, Kentucky, Missouri, North Carolina, Oklahoma and Tennessee. The group traveled from Harrah’s Convention Center in Cherokee to Franklin to historic Nikwasi to begin the pilgrimage.

The group was welcomed to Franklin by the master of ceremonies, Bob McCollum of the Nikwasi Initiative. Jim Tate, Chairman of the Macon County Commissioner, delivered the Macon County welcome address, followed by a welcome on behalf of North Carolina by D. Reid Wilson, Secretary of the Department of Natural and Cultural Resources of the North Carolina.

“As secretary, one of my top priorities in our department is to ensure that we tell more inclusive, accurate and representative stories about the people and history of our state, a long and rich history and sometimes complicated that started with the American Indians,” Wilson said. “As a department, we want to bring more attention to the story of the Trail of Tears and teach future generations about this important story.”

“New evidence has led to the identification of a Trail of Tears (TOT) route through 40 miles of Macon County with many miles of original trails surviving on land currently held by the state, Eastern Band of Cherokee Indians (EBCI), Mainspring Conservation Trust or US Forest Service,” Wilson added. “This course, which has not been certified by the National Park Service, a milestone that has been discussed with the department, presents an opportunity unique for various partnerships to develop public review corridors, greenways and trails so that more people can experience the original trail as it was or as close to what it was as possible so that people can understand the ancient Cherokee homeland.

“As we consider our role as protectors of our cultural heritage, protecting our sacred sites is a responsibility we take incredibly seriously,” Condill said. “We will always advocate for the highest level of protection when for so long, too long, these places were not under our control.”

“The eastern band has done a lot of work to regain control of these sacred sites, but there is still a lot to do,” she added. “As you hear about this sacred place, I hope we can continue to collaborate in a way that is most respectful of its continued importance to us as the Cherokee people.”

After the speakers at the future home of the EBCI Museum and the tour of the historic Nikwasi mound, the group walked across the street to the Mainspring Conservation Trust for lunch and speakers. Stacy Guffey of Franklin City Council and the Cowee School Arts and Heritage Center and Elaine Eisernbraun of the Nikwasi Initiative hosted the group at the Mainspring campus.

The group then traveled to Cowee for a program at the EBCI Community Forest presented by Ben Steere, Associate Professor of Anthropology and Sociology, and Brett Riggs, Sequoyah Professor Emeritus of Cherokee Studies, at Western Carolina University. Attendees had the chance to walk through the unique forest and delve into the ancient history of Cowee, including the archeology of the area. The presentation in Cowee discussed the community at the 19e century, his role in Euchellah v. Welch and its relevance to remoteness as it stands on the Trail of Tears.

McCollum and Guffey hosted the group in a program at the Cowee School & Heritage Center. Dr. Bill Jurgelski presented a program “To keep your lands separate between you, the reservations, the withdrawal and the treaty of 1819 in western North Carolina”. Following a reception, Lamar Marshall, Director of Southeast Heritage Research, presented a TOT program through Raven Creek Settlement. Marshall worked hard to create a map that was presented to the group showing the TOT route and its many walking trails discovered in Macon County.

While visiting the Cowee area, the group had the opportunity to tour the Cowee housing estate and mound. The city was located along a major trade route in a bend in the Little Tennessee River, one of the most important central Cherokee cities. It was an important center for trade and diplomacy in the 18e century.

The pilgrimage ended with a program at Kituwah Town & Mound, located between Cherokee and Bryson City. Kituwah was the great mother city of the Cherokee people. The old town square remained in the possession of the Cherokee people until 1821. One hundred and seventy-six years later, the EBCI purchased the property, Restaurant Kituwah, properly called Ani-Kituwagi or the people of Kituwah.

The Trail of Tears, designated a National Historic Trail by Congress in 1987, commemorates the forced displacement of the Cherokee people from their homeland in the southeastern United States to Indian Territory, present-day Oklahoma, in 1838 to 1839.

In 1993, TOTA entered into a cooperative agreement with the National Park Service (NPS) to promote and engage in the protection and preservation of the resources of the Trail of Tears National Historic Trail. Additionally, the agreement promotes awareness of the legacy of the trails, including the effects of the U.S. government’s Indian removal policy on the Cherokee and other tribes, primarily the Chickasaw, Choctaw, Muscogee Creek and Seminole, and to perpetuate management and development techniques. consistent with the NPS trail map.