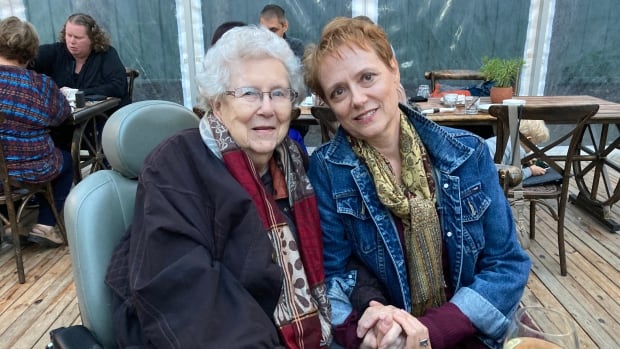 About 30 direct-care health workers were fired from their jobs on Monday for not being vaccinated or refusing to comply with COVID-19 testing on the first day those warrants came into effect, according to the province.

Allyson Currie’s family are relieved that numbers have remained stable at Tabor Home in Morden, home to her 94-year-old mother, Velda Currie.

Tabor Home was one of at least three care homes in Morden, Winkler and Altona that described the worst-case scenario for families last week. If facilities faced shortages once the vaccine requirements for personal care home workers went into effect on October 18, relatives have been urged to consider coming in to care for residents or withdrawing them altogether.

“The first word that came to my mind was ‘alarming’. I thought, really, is that true?” Allyson said.

“The most worrying part was how are we going to do this and how safe is it going to be for mumâ€¦ She’s here because we can’t take care of her.”

Allyson lives in Winnipeg but made the trip to visit her mother on Monday, just in case. Staffing levels appeared normal and the environment seemed as calm and pleasant as usual, she said.

Tabor Home, Salem Home and the Southern Health Region confirmed that “appropriate staffing levels” were maintained at those locations on Monday.

“These efforts will continue to ensure that staff are redeployed to support areas that may need additional assistance,” the joint statement read.

About 42,000 direct-care healthcare staff who work with patients, residents and clients were to be doubly vaccinated by Monday or undergo a COVID-19 test every 48 hours.

Shared Health, the organization that coordinates the delivery of health services in the province, said nearly 29,400 workers have been verified as vaccinated so far. Another 7,000 workers said they too were vaccinated, but the verification process continues.

As of Friday, around 1,800 workers were identified as unvaccinated and in need of testing.

Shared Health says those who refused accommodation for the test would be suspended without pay.

This includes at least 30 direct care workers across the province who were fired from work Monday afternoon. This figure could change during the week.

Manitoba Health Minister Audrey Gordon said the 30 workers reside across the province. She said there had been no “disruption in service or staffing issues” on Monday, although she confirmed the province needed to replace locations where planned.

Three nursing homes that raised these concerns last week are all located in or near some of the province’s lowest vaccination areas in Southern Health, the region with the lowest overall rates.

Some workers demonstrate in Altona

The union that represents workers at Salem Home in Winkler and Tabor Home in Morden said there was no staff shortage on Monday.

In a letter to families on Monday, Tabor management said staff were stable but had temporarily extended the hours of operation of designated family caregivers, just in case this week.

There were, however, staff shortages at Eastview Place in Altona.

CBC News spoke to eight of those staff who gathered outside Eastview with signs suggesting their charter rights were being violated due to vaccine warrants, as well as mandatory testing .

None of the workers wanted to do an interview with CBC News. They said there was no privacy in the facility as testing for unvaccinated staff takes place at the entrance to the building where others can see.

They said they felt discriminated against and forced to quit their jobs.

The Manitoba Human Rights Commission does not generally consider vaccination warrants to infringe rights enshrined in the Canadian Charter of Rights and Freedoms.

Winkler mayor Martin Harder said he felt for families with loved ones at the three southern nursing homes.

“They cannot go and provide the services, otherwise they might already be transporting them to their homes,” he said.

He is convinced that no one at Salem Home in Winkler will be left without care, be it healthcare workers or loved ones.

“My only concern is whether that would increase the risk of volunteers coming in to intervene,” said Harder.

He attended a small rally over the weekend of unvaccinated healthcare workers to connect with people. Many feared they were on the verge of losing their jobs, Harder said.

“It’s for their protection”

Harder said most people opposed to vaccines seemed to have strong beliefs on the issue. Those who opposed the testing seemed more upset with the drawbacks of it, he said.

Harder has struggled with what he sees as a â€œtwo tier society being builtâ€ between vaccinated and unvaccinated Manitobans.

He also says that those who choose not to be vaccinated always bear some responsibility to the community.

â€œI would just encourage them to make sure they don’t quit their jobs because we have so many loved ones who are in personal care homes, in hospitals, who need them,â€ Harder said. “It’s for their protection.”

About 30 unvaccinated direct-care health workers were fired from their jobs on Monday for also refusing to be tested. October 18 was the deadline for thousands of public employees to be vaccinated or tested every 48 hours. 2:12