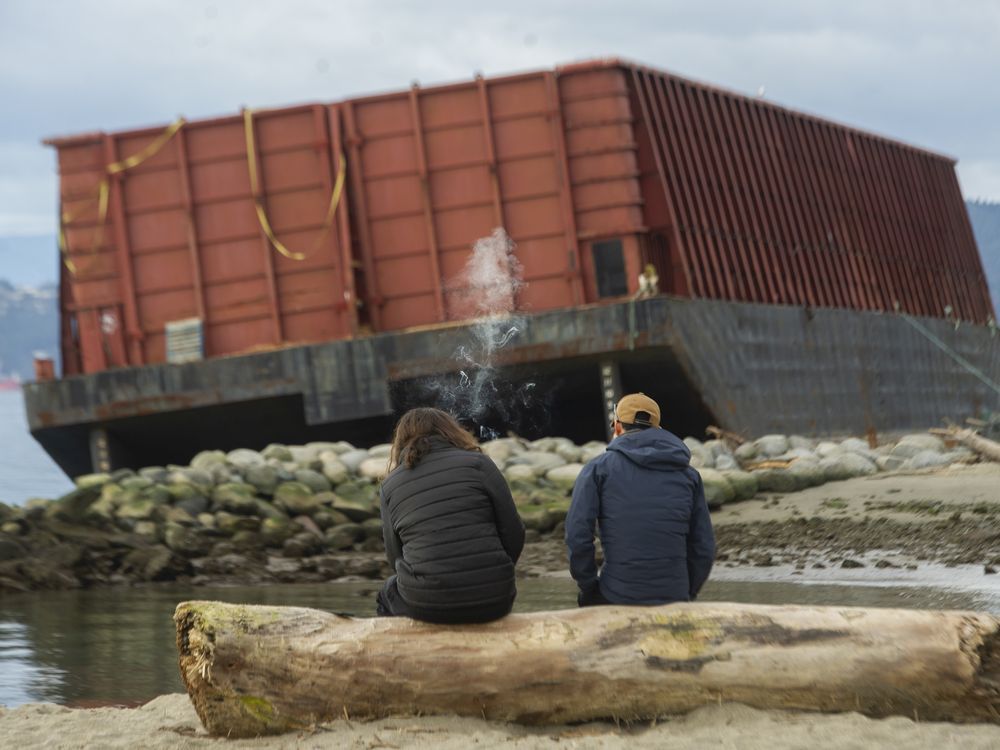 No timeline for removal of 5,000-ton barge stranded for months on Vancouver beach

No date has been set for the removal of a 5,000-ton barge that has been stranded on Sunset Beach in downtown Vancouver for more than five months.

The barge struck the beach, sideways, on November 15, 2021, during an extraordinary high tide and as a series of storms hit the southwest coast of British Columbia, causing widespread flooding.

At one point that day, as the untethered monster was pushed east across English Bay, it was feared it might hit the Burrard Bridge, causing it to be temporarily closed.

During the first week of December, the owners – Sentry Marine Towing – received a permit from Transport Canada to attempt to remove it, but the effort was unsuccessful.

By then the barge, due to its size and landing spot, had attracted a lot of attention.

In mid-December, the Vancouver Park Board sought to shed some light on the situation by posting a “Barge Chilling Beach” sign next to the empty ship.

It was a nod to Mount Pleasant’s Guelph Park, also known as Dude Chilling Park.

Three weeks later, the sign was repainted to reflect the Aboriginal name for this beach – “I7iyelshn, pronounced ee-ay-ul-shun, meaning soft underfoot. The sign has been dismantled.

On February 9, the City of Vancouver released a statement saying that Vancouver Pile Driving – a longtime BC company that has managed some of the province’s biggest marine infrastructure projects – had been hired by Sentry Marine Towing to cut the barge into pieces and take it away.

At that time, the city said environmental, archaeological and structural assessments were underway.

The city did not cost the project, but said it would involve the Department of Fisheries and Oceans Canada, the Canadian Coast Guard, the Vancouver Fraser Port Authority and the city and parks board.

The statement said the area around the barge would be converted to a construction site with fencing, detours and signs and the project would take approximately four months.

The day after the city’s statement was released, the barge owner told media that the company was awaiting permission from the city council and parks to begin work, which could be as early as March.

A person who answered the phone for Sentry Marine Towing on Tuesday said they were unable to comment.

In a prepared statement released Wednesday, a spokesperson for Vancouver Pile Driving said it could not confirm the start date for the barge removal.

“The Department of Fisheries and Oceans advisory letter has been received,” they said. “Other permits and assessments are still in progress. Barge pieces and debris will be loaded onto a barge and towed by sea for recycling or disposal.

On Wednesday, the Vancouver Fraser Port Authority said it was monitoring the deconstruction operation for “awareness” purposes, but had no official role in dismantling the barge.

The Canadian Coast Guard and Fisheries and Oceans Canada did not respond to a request for comment.

More news, less ads: Our in-depth journalism is possible thanks to the support of our subscribers. For just $3.50 a week, you can get unlimited, lightweight access to the Vancouver Sun, The Province, National Post and 13 other Canadian news sites. Support us by subscribing today: The Vancouver Sun | Province.

Sign up to receive daily news from the Vancouver Sun, a division of Postmedia Network Inc.

The next issue of Vancouver Sun Headline News will soon be in your inbox.