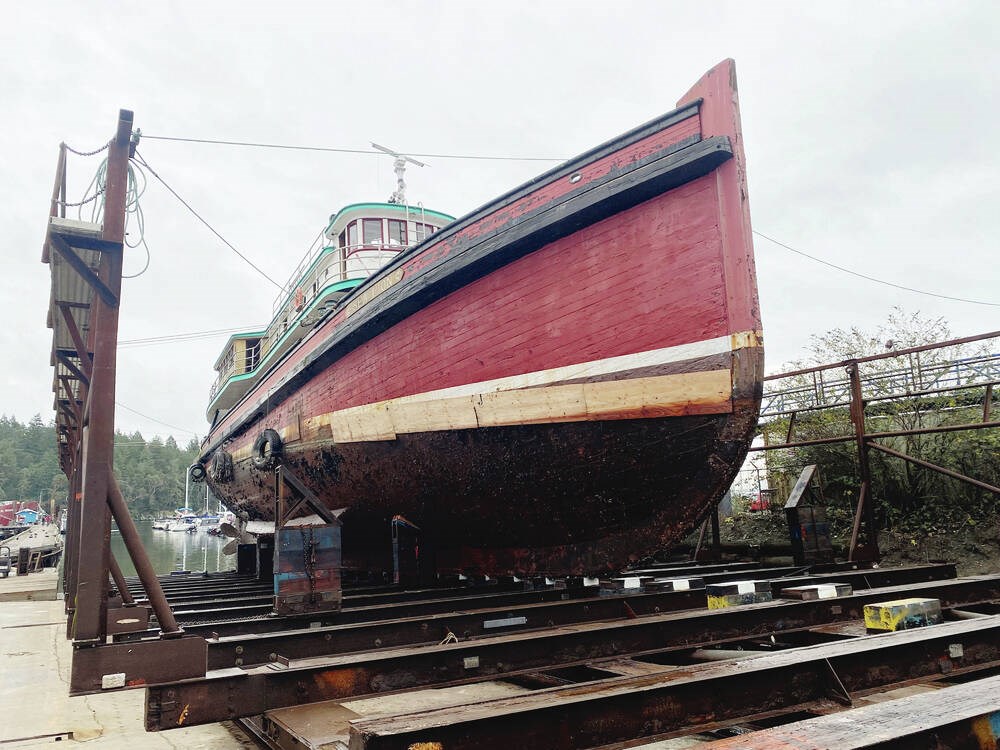 The Sea Lion was built on a one-piece keel from a 120-foot fir log, milled three feet deep and two feet wide, and launched into the waters at Coal Harbor in Vancouver in 1905.

The MV Sea Lion, the West Coast’s oldest wooden tugboat, has played an important role in the province’s forestry and shipping industries – and an infamous role in its social past.

Now, all that remains of the 116-year-old tugboat is a partial skeleton – its planks have been removed and salvage parts stored for museums by crews at the Canadian Marine Engineering Yard in Nanaimo.

“He had a lot of character, a lot of interesting history… and it is with a heavy heart that I am doing this project,” said Jim Drummond, project manager on the demolition of the 114-foot Sea Lion this week.

The Sea Lion was the first tugboat to pull huge Davis timber rafts woven with chains and cables, measuring approximately 500 feet in length and carrying 2.5 million board feet of lumber. The tug answered the call for spruce used in the production of airplanes during World War I and for lumber during World War II.

The Sea Lion was also at the center of the conflict involving the migrant freighter Komagata Maru, when 340 Sikhs, 12 Hindus and 24 Muslims tested Canadian immigration laws in 1914. That summer the tug was loaded with 125 officers. immigration officials and police in an attempt to force the freighter out of Vancouver harbor, but angry passengers pushed the tug back, throwing coal and bricks.

The Komagata Maru was eventually escorted by the Sea Lion and a warship after a court ruled that it was not cleared to land. The event remains a scar in Canadian history.

The Sea Lion worked as a tugboat until 1969 and has lived many lives and engine changes since, through several owners – as a private yacht, cruise house, rental boat, ecotourism boat and fishing lodge. .

Drummond, who grew up in shipyards on the coast and lived and worked aboard tugs, observing the Sea Lion at work several times, said he wanted to be a part of the famous tugboat’s “last chapter”.

The Sea Lion had been abandoned in Maple Bay for the past five years and was pulled in November due to environmental concerns, after the abandoned vessel began to stray.

There was initial interest in preserving the tug. But in the end, conservation turned out to be too expensive.

“It would either be someone with really deep pockets or a job in government,” Drummond said. “And that just didn’t happen.”

Drummond’s offer of $ 393,000 to dismantle the tug was therefore accepted by the federal government.

The Sea Lion was built on a one-piece keel from a 120-foot fir log, milled three feet deep and two feet wide, and launched into the waters at Coal Harbor in Vancouver in 1905.

At 218 gross tons, the original Sea Lion was powered by a single McKie and Baxter triple-expansion marine steam engine and quickly gained a reputation as one of the best extractors on the coast.

In his book Wind and weather: the history of towing in British Columbia, Ken Drushka called the Sea Lion a “classic log towing boat”.

It had power and seaworthiness, but it was also designed for the crew. Drushka said it had a spacious living room, fitted with a piano, and that “the whistle had a sliding scale on which the crew played a somewhat haphazard repertoire of songs, learned and practiced during long tows. Along the coast “.

The Sea Lion had a number of unusual features for a tugboat at the time, Drushka said, including a steam-powered steering gear and towing winch, steel tow rope, dual steering and engine controls. on the aft deck, and finally, the first land-based radio and searchlight ship in British Columbia

Drummond marvels at the original craftsmanship of the tugboat. “The carpentry work is amazing,” he said. “I think of all the hours that went into building this boat and how they did it all without power tools. They used scissors, adzes, planes, everything was by hand.

“To do a restoration on this tug, it would take dozens of people working for two years. Where would you get the money for it? And where would you find the people? They just don’t exist anymore.

Some wooden planks were salvaged and portholes, doors, railings, some interior cabin accessories and engine room plates were set aside. The Royal BC Museum has requested pieces for its collection, and boards are being sent to a national Sikh association in Toronto which has requested part of the tugboat, Drummond said.

He said many of the original features have been removed by various owners over the years, and more recently the “pirates” arriving by water around the Nanaimo yard have taken more of them.

An 80-year-old former crew member who reported to the Canadian Marine Engineering Yard in Nanaimo with papers showing he worked on the Sea Lion received an undisclosed piece of the tug.

“It brought tears to his eyes,” Drummond said.