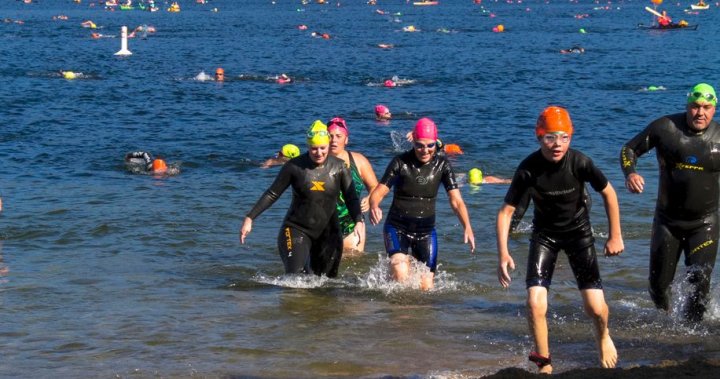 After a two-year hiatus caused by the pandemic, Canada’s largest and longest open water swimming event returned to Okanagan Lake on Saturday morning. The indoor savings “Across the Lake Swim” challenges participants to swim 2.1 kilometers from the old ferry docks in West Kelowna to the shores of Hot Sandy Beach in Kelowna.

About 650 people from across the country participated in the 74e annual swim, including Brent Hobbs, 54, of Kelowna, who finished third in just 27:24. He says that despite the success, he does not count the points.

“I’ve been a swimmer all my life. I do it for fitness and my mental health and I also like to compete,” explained Brett Hobbs.

“I’ve lived in Kelowna for 20 years and for me that’s the culture in Kelowna.”

Karlyn Pipes was inducted into the International Swimming Hall of Fame in 2015. She also finished near the top in Saturday’s event, finishing sixth. Pipes describes swimming as “the perfect sport because it really is for everyone”.

“I mean the clock will judge you, but you know you walk in there and you feel ageless.”

A living legend from Kelowna defined just that. Conny Stamhuis completed her Across the Lake Swim just days after turning 90. Although she received the loudest cheers of all who crossed the finish line at Saturday’s event, she certainly isn’t doing it for attention.

The former registered nurse was aiming to raise $10,000 for Doctors Without Borders, an emergency humanitarian medical group. She raised over $17,000.

Kelowna woman, 90, will complete Across the Lake swim for 7th time

“They’ve always been my favorite charity, which is why I decided, well, maybe when I do this at 90, I’ll make enough news for people to donate for them” , said Stamhuis.

Stamhuis is best known in the community for her ability to push herself, regardless of age. She moved from the Netherlands to Canada in her 20s, studied nursing in her 40s, started swimming in her 60s, and first swam across Lake Okanagan at the age of 80. She described today’s challenge as “easy”.

“It was actually a really good race,” Stamhuis said.

“The water was beautiful, very beautiful. It wasn’t too wavy or anything like that.

While Stamhuis was the oldest person to compete in Saturday’s swim, a new generation of first-time participants also crossed the finish line. A trio of 8-year-olds were filled with excitement at their big achievement.

“I feel good and I’m just happy to have crossed the finish line,” said Amelia Malcolm.

Toronto cancels swimming lessons for more than 1,000 participants due to instructor shortages

“I felt really proud of myself for doing it for the first time,” said Tristan Gilchrist.

“Basically, you can never stop kicking, but then you have to, like your arms, you can give them a break. But it was really good to cross the finish line, I was really proud”, described Stella Edstrom.