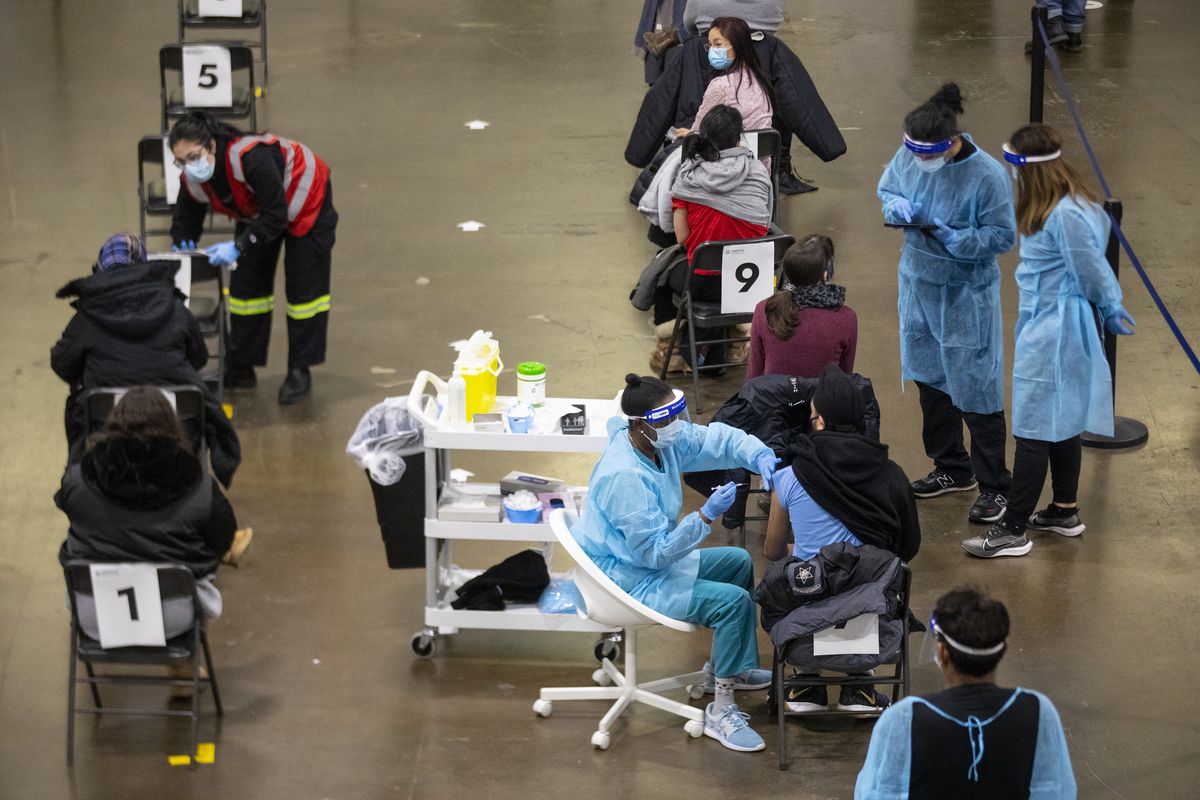 Manitoba, facing a skyrocketing rate of positive COVID-19 tests and the possibility of its health care system being overwhelmed again, has introduced new restrictions to reduce the number of attendees at major events.

Health officials and governments across the country are closely monitoring how often Omicron infections turn into severe cases. Because the variant is so transmissible, health systems could be strained if only a small percentage of people with COVID-19 were to be hospitalized.

Admissions are increasing in Ontario and Quebec, two provinces that have reported a record number of new daily cases during the holidays. On Boxing Day, Canada passed two million cases of COVID-19, a milestone for a country with a relatively small population.

Now, as Omicron continues to escalate, a patchwork of policies regarding testing, tracing and isolation is emerging across the country. British Columbia, Alberta and some other provinces have restricted the general population’s access to sensitive laboratory tests.

Manitoba said Monday that access to testing will vary based on vaccine status. For example, a vaccinated person with symptoms of COVID-19, but otherwise healthy, will receive a rapid take-home test; if it is positive, the person must come back for a lab test.

Under the province’s revised rules, restaurants and other licensed establishments are required to stop selling alcohol at 10 p.m. daily and are subject to Manitoba’s new capacity expectations. Gatherings for vaccinated people and those under 12 are capped at 50% of capacity, or 250 people, whichever is less.

Capacity restrictions apply to church services, weddings, paid entertainment events, gyms, casinos, indoor and outdoor public gatherings, and other places where people interact. The new rules take effect Tuesday, just one week after the most recent round of tightening in Manitoba. The province has not changed the rules for retailers or private gatherings.

Manitoba, which earlier in the pandemic shipped critically ill patients to other provinces after running out of intensive care capacity, said restrictions are needed to protect its healthcare system as the Omicron variant sweeps across the province .

Brent Roussin, Manitoba’s chief public health officer, stressed Monday that sick people should stay home, acknowledging that this can be difficult to do while on vacation. The province is struggling to contact a “significant” number of people with COVID-19, saying they are not meeting isolation requirements.

“We are telephoning sick people who have come to be tested and tested positive, but no one is home,” Dr Roussin told reporters on Monday. “I understand this is a difficult time, but if you are sick and need to be tested you need to self-isolate until you get your results.”

Meanwhile, the United States Centers for Disease Control and Prevention on Monday relaxed the isolation requirement for people with COVID-19 to five days, if asymptomatic, followed by five days of wearing a mask around. other people. Previously, the CDC recommended 10 days of isolation for positive cases.

The CDC said science shows the majority of transmissions occur a day or two before symptoms appear, and two to three days after.

In Canada, isolation expectations vary. For example, fully vaccinated people in British Columbia who test positive for COVID-19 must self-isolate for at least seven days from the onset of symptoms; in Alberta, positive cases must be isolated for 10 days, regardless of vaccination status.

Experts warn that the official tally of cases dramatically underestimates the true spread of the virus. This was exacerbated last week when several cities and provinces asked people with mild symptoms to forgo lab testing to make sure there was enough capacity for high-risk cases.

Manitoba has had 2,154 new cases of COVID-19 since Christmas Eve, with a province-wide positivity rate of 19%. He has a backlog of around 11,500 tests, said Dr Roussin.

British Columbia said it added 6,288 new cases in the previous three days. In Ontario, Health Minister Christine Elliott on Monday reported a day-long total of 9,418 new cases. Alberta will provide preliminary data on how COVID-19 will unfold over the holidays on Tuesday.

In Quebec and Ontario, daily hospital admissions have started to increase. Quebec Health Minister Christian DubÃ© said on Twitter Monday that there were 141 more people in the hospital due to COVID-19 since December 22. â€œAdmissions are on the rise. We must limit contacts, â€he urged in the message to Quebecers.

Hospital admissions in Ontario are also accelerating and tracking data from the Ontario Hospital Association shows intensive care admissions increasing steadily; from a seven-day moving average of 156 people in ICU to an average of 166 on Monday. However, so far, ICU admissions are still below the best-case scenarios predicted by Ontario’s COVID-19 Scientific Advisory Table modeling.

Quebec has already delayed the return to in-person classes for high school students by a week, but has left the return date unchanged for younger students.

In Ontario, no changes have been made to the return to school scheduled for January 3. On Monday, a spokesperson for Education Minister Stephen Lecce did not respond directly to questions from The Globe and Mail about whether the return date to Ontario would change. However, Mr Lecce’s office asked The Globe to report on comments by Chief Medical Officer of Health Kieran Moore on December 21.

Last week, Dr Moore told reporters he had consulted with experts on whether to delay going back to class and, at this point, they saw no need to delay classes.

Since most of the Atlantic provinces did not report any new COVID-19 numbers over the Christmas weekend, many reported numbers for three days on Monday. They show that cases are climbing on the east coast as well. Newfoundland and Labrador has reported 357 new cases in the past three days, including a new daily record of 135 cases on Sunday. The province urged people to reduce their contact and receive their booster shots.

New Brunswick has reported 639 new cases in the past three days. On Monday, he said 35 people were hospitalized and 14 of them in intensive care. As of Monday evening, New Brunswick reduced its private assembly limits to a household plus 10 people and the capacity limits for malls, stores, restaurants and businesses are 50%.

Prince Edward Island has reported 156 cases since Friday and Nova Scotia reported 581 new cases on Monday and a hospital outbreak in Halifax that has so far affected fewer than five patients.

Our Morning Update and Evening Update bulletins are written by the editors of The Globe, giving you a concise summary of the day’s most important headlines. register today.