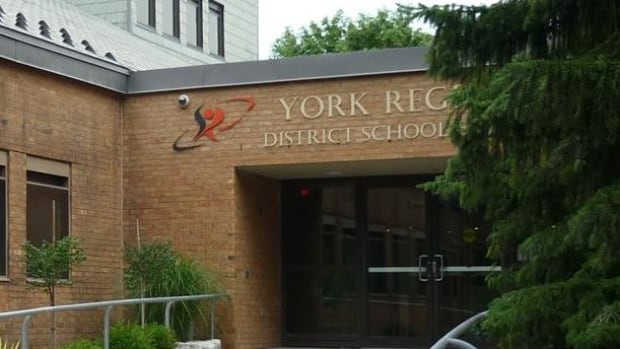 Racist anti-Semitic and anti-Black graffiti has been found at three public schools in York Region, according to the local school board.

The graffiti was discovered at two high schools and an elementary school, according to a letter obtained by CBC Toronto, written by York Region District School Board assistant director of education Cecil Roach. York Regional Police have confirmed secondary schools are in Newmarket.

“In secondary schools, images of a swastika and the word N were etched into toilets, and in elementary school, a swastika was drawn on an interior door,” Roach said in the letter from Wednesday.

The news comes as reports of anti-Semitic acts mount, both in York Region, where graffiti was found on the school building of a former synagogue and in a park in Markham in January, and at several schools in Toronto.

Roach said the council reported the graffiti to the police and was also trying to find out who was responsible and hold the “wrongdoers” accountable. The council sent notices to the house about the graffiti.

“We are disappointed that these incidents have occurred at our schools, and we acknowledge and apologize for any injury and damage such an incident may cause,” Roach said.

“In all cases, the graffiti was promptly removed. Officers are investigating these incidents and are working closely with the schools,” she said.

According to Nicolle, police received a report of anti-black graffiti carved into a cubicle in the boys’ toilets at Newmarket Secondary School on March 4, and two carvings of anti-Semitic and anti-LGBTQ graffiti on the front of lockers in the same school in March. 7.

At Huron Heights High School, officers were called after hate graffiti was found in the boys’ restroom on Tuesday. “The graffiti included a number of drawings, profanity and male genitalia, as well as possibly anti-black and anti-Semitic graffiti that was partially scribbled on,” Nicolle said.

Friends of the Simon Wiesenthal Center (FSWC), a nonprofit human rights organization committed to combating racism and anti-Semitism, said in a press release on Wednesday that news of the graffiti was disturbing.

The organization says the third school is Glen Cedar Public School in Newmarket, which runs kindergarten to grade 8, but the name has not been confirmed by the board or police.

“We are saddened to once again hear of hate graffiti found in schools, this time in Newmarket,” Michael Levitt, the organization’s president and chief executive, said in the statement.

“These growing incidences of hate are creating a toxic environment for all students and staff and must be addressed with the highest priority by education officials.”

Levitt said the organization expects the board to identify and hold accountable those responsible for “these heinous acts” and provide additional training on anti-Semitism and racism to all students. The organization says it has reached out to schools to deliver its education programs.

The FSWC said it was working with the Toronto District School Board on ways to combat rising anti-Semitism in its schools.