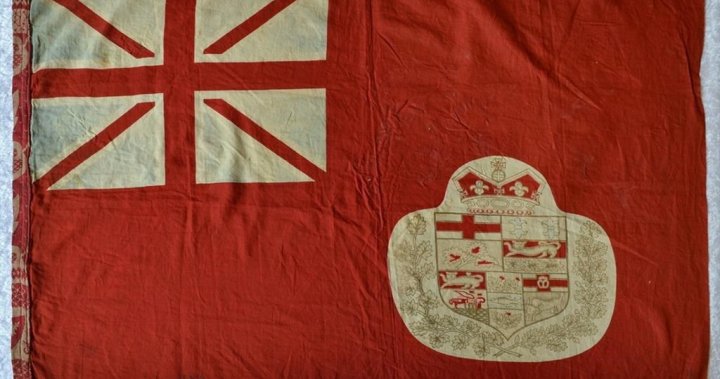 Legend has it that when Canadian troops landed under a hail of German fire in the French port of Dieppe in August 1942, one of the hundreds of people who eventually died in the attack was carrying an old flag.

Exactly how this red and white flag ended up in the Nazi-held French port – and even if it was there permanently – remains a mystery.

But more than 80 years later, this flag will play a central role in commemorating the doomed raid on Dieppe at this year’s national Remembrance Day ceremony – thanks to three Americans.

What is known about the 150-year-old flag begins at a garage sale in Columbus, Neb., in 1965. It was there that Charles Lowry found the old Red Ensign in the hands of an American veteran. .

“It was an old flag and he was just going to throw it away,” says Charles’ son, Mike Lowry. “And dad said, ‘What’s the deal with the flag?’

The veteran told Charles that he had been a guard at a POW camp at the end of World War II in 1945. At one point he noticed a German prisoner hiding what he presumed to be a Nazi flag, which turned out to be a Red Ensign.

The Red Ensign served as the de facto national flag of Canada from 1892 until 1965, when it was replaced by the maple leaf. The design featured a Union Jack and different coats of arms, depending on which provinces were part of Confederation at the time.

This particular flag, whose age has been confirmed by the Royal Canadian Legion, dates back to the period between 1870 and 1873, after Manitoba joined Confederation but before British Columbia.


The American veteran knew none of this at the time. What he did know was what the German soldier had told him: that the flag had been torn from one of the 916 Canadian soldiers who had died three years earlier in the ill-fated Dieppe raid.

In the early morning hours of August 19, 1942, nearly 5,000 Canadian soldiers, along with 1,100 British and American soldiers, landed in the Nazi-held French port with orders to take and hold as much ground as possible. before retiring.

While the goal was to test the German defenses and the feasibility of launching an Allied amphibious assault on Europe, the results were disastrous: 2,400 Canadians were wounded or captured in addition to hundreds who were killed.

“The German claimed he wasn’t involved in the fighting, but was just with a burial detail, and found it on a dead Canadian and basically took it as a keepsake,” Mike said. “They took it from him, needless to say, and the plan was to give it to a Canadian unit.”

Instead, the flag returned to Nebraska and into the hands of Charles, who proceeded to try to identify it with Mike, who was in high school at the time.

The Remembrance Day ceremony in Beaconsfield, an opportunity to reflect on democracy

“We were never able to find him. And it was an effort of (my father). I know he was constantly trying to find out, even after I was in college, he was always trying to find someone who would know something.

When Charles died in 2003 aged 93, the Red Ensign passed to Mike, who had largely forgotten about it. But remembering his father’s desire to return him to his rightful home, he started the search again.

He eventually confirmed his Canadian heritage, in which case he contacted the Canadian Embassy in Washington, D.C. But after a lukewarm response, he contacted the Royal Canadian Legion about five years ago, who were eager to take him on.

How a 70-year-old flag might have ended up in Dieppe remains unclear, but the Legion says Canadian soldiers often carried flags into battle during the First World War. Some of them were later given to WWII soldiers, possibly for luck.


The Red Ensign traveled to Dieppe with a delegation of veterans in 2019, and Legion spokesperson Nujma Bond said he will be given a place of honor at the Tomb of the Unknown Soldier on Remembrance Day to commemorate the battle.

When asked how he feels when he hears that the flag his father rescued from the trash will be displayed at Canada’s national Remembrance Day ceremony, Mike says his spirit goes to his father.

“Dad wanted to return him to a family or unit he belonged to,” he says. “And I feel like now it’s been given back to the whole country. I think he would be very humbled and very proud of that. I know I am.”

Snowfall warnings cover the southern interior of British Columbia, with power mostly restored after the storm