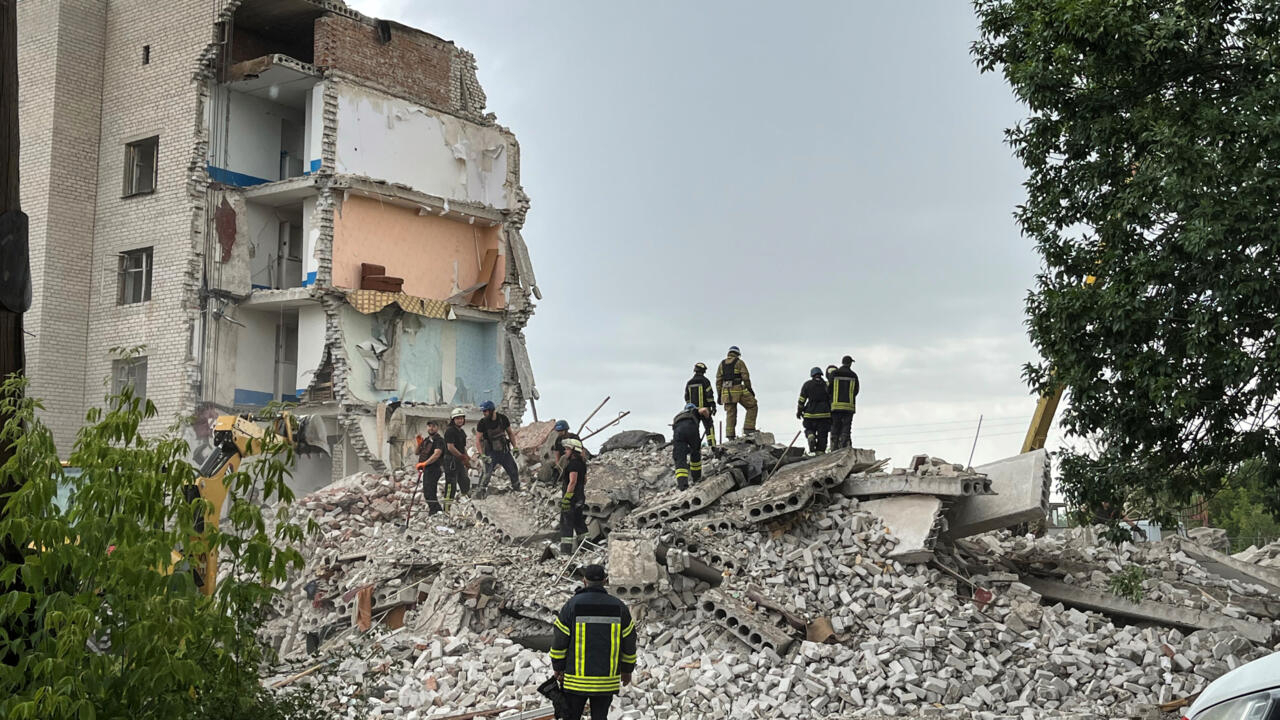 Chasiv Yar (Ukraine) (AFP) – A Russian missile struck a building in eastern Ukraine on Sunday, killing at least 15 people as Moscow forces sought to consolidate their control over the Donbass region.

“During the rescue operation, 15 bodies were found at the scene and five people were extracted from the rubble” alive in the town of Chasiv Yar, the local branch of the Ukrainian emergency services said on Facebook.

“At least 30 other people are under the rubble” of the four-storey building after it was hit by a Russian Uragan missile, Donetsk regional governor Pavlo Kyrylenko said earlier on Telegram.

The building was partially destroyed in the strike, AFP correspondents noted at the scene where rescuers were digging through the rubble with a mechanical shovel.

Rescuers had so far been able to make contact with three people under the rubble, rescuers said.

After fighting long battles to seize the last areas of the neighboring Lugansk region, Russian troops are now turning their sights to Donetsk as they seek to take control of the entire Donbass region.

“I was in the bedroom, I came out and everything started to shake, to collapse,” a resident of Chasiv Yar told AFP, who declined to be named.

“What saved me was the force of the explosion that pushed me into the bathroom, covered in blood. I barely got out,” she said.

The Donetsk region was under persistent shelling, while Russian ground attacks were all but halted, the Ukrainian army general staff said on Sunday.

On Saturday, three people were killed and 23 others injured by shelling in Donetsk, Governor Kyrylenko said.

Strikes were also reported in Kharkiv, Ukraine’s second largest city in the northeast, where an “educational institution” and a house were hit, injuring one person, according to regional governor Oleg Sinegubov.

“Such terrorist actions can only really be stopped with modern and powerful weapons,” Zelensky added, thanking the United States for its latest military aid program.

To give Kyiv a boost, Washington signed a $400 million package, including four additional high-mobility artillery rocket systems to add to the eight already in place and high-precision artillery munitions who had not previously been sent to Ukraine.

“This is a new development in our support for Ukraine in this battle in Donbass,” a senior defense official quoted by the US Department of Defense said.

On Sunday, US Secretary of State Antony Blinken said Russia’s restriction on Ukrainian grain exports may have contributed to unrest in Sri Lanka sparked by severe food and fuel shortages.

“We see the impact of this Russian aggression happening everywhere,” Blinken told reporters in Bangkok.

Renewing a request he has repeatedly made, Blinken called on Russia to let around 20 million tonnes of grain leave Ukraine, which Moscow invaded in February.

On Saturday, Canada agreed to deliver the turbines needed to maintain the Nord Stream 1 gas pipeline to Germany, despite sanctions against Russia.

Ukraine had urged Canada not to return the turbines, which are currently undergoing maintenance at a Canadian site owned by German industrial giant Siemens.

Gazprom cut deliveries through the pipeline, blaming the move on the late return of components and raising fears of a gas shortage in Germany.

In addition, Canada announced on Saturday its intention to extend its economic sanctions against Russia to industrial manufacturing.