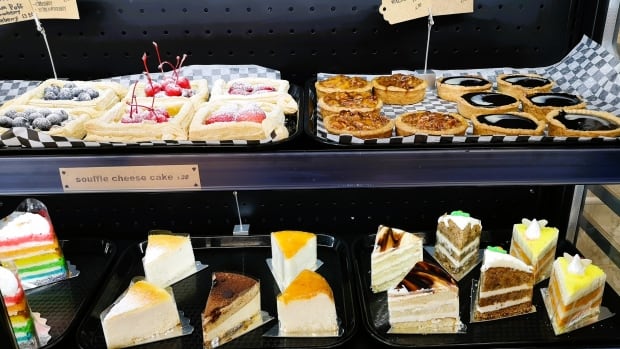 Virtually every country on the planet enjoys sweets of one form or another. The Argentinians have alfajores, the Sicilians cannoli; while the Levant has knafeh, Pakistanis have gulab jamun, and East Africa has kashata.

In Waterloo Region’s Korean restaurants and cafes, there’s a host of bubble teas served as a sweet balance between the galbi, bulgogi and spicy pork jeyuk bokkeum you might eat at Korean barbecue restaurants.

But sweets have a special place in the Korean menu. So much so, in fact, that about a year ago, Young Yun opened Bingsu Korean Dessert Café in downtown Waterloo.

A dessert and sweet snack, bingsu is finely crushed ice made from a solution of frozen milk ⁠— shaved into “snowflakes” ⁠— from a specialized machine.

The café prepares six bingsu, topped with fruit and sauces, from tiramisu to matcha.

In Korea, bingsu is popular even in winter, according to co-owner Sunny Yoo.

“I believe that in Canada, customers will also like bingsu in winter.”

The restaurant also offers hot desserts, including hot “kraffle,” a hybrid Korean waffle-croissant, and bungeo-ppang, a unique fish-shaped waffle stuffed with homemade red bean paste. Other stuffings may include chestnuts or walnuts.

Made with a semi-sweet batter and baked in a large waffle press, the snack ⁠—also known as taiyaki in Japan ⁠—is inspired by restaurateurs who as children in Korea remember visiting food stalls of street food and having bought the snack-go.

Probably of Japanese origin, bungeo-ppang is more than a candy and less than a meal. It was often used as a filling bite for people who couldn’t afford more.

“Bungeo-ppang is a street food for when you’re hungry, and we wanted to introduce it here,” Bingsu’s Yoo says. “It’s a little healthier and very delicious.”

The meaning of the fish shape, according to Yoo, brings “good blessings and good fortune.” The waffle gives a fluffy texture rather than a cake.

The history of bread in Korea

Across town in the Mill Courtland neighborhood of Kitchener, Manon Bakery is an 18-month-old business owned and operated by Chae Lee and Kelly Kim.

The Highland Road Bakery and Cafe serves French pastries (such as strawberries and sponge cake) as well as a wide range of Korean sweets and breads.

For her part, Kim makes Korean jeyuk bokkeum “hoagies” on fluffy homemade buns. A contrast with the crispy French baguette of the Vietnamese banh mi sandwich.

In Korea, bread is generally soft and slightly sweet, and it doesn’t have the long history of, say, French or Italian breads, according to Lee. Such bread, in fact, reveals an interesting (and charged) geopolitical history: the country, now split in two, was once under the rule of the Japanese Empire.

“The history of bread in Korea is only a hundred years old and in fact [comes from] Japan,” says Lee. “Unfortunately, at the beginning of the 20th century [Korea] was under Japan. It was colonization. We took a Japanese style [for baking].”

Lee makes a croquette, or korokke, also inspired by the west.

“We learned our korokke through German baking,” he says, “We make it with potatoes, ham and onions and fry it. But we make it with a sweet bread. It’s to Korean. It’s quite different.”

Regardless of colonial politics and history, for Yoo and Lee, pastries and baked goods evoke childhood memories.

Lee, showing a pastry with a crumbly filling called saboro-ppang, says it’s his favorite of the dozens offered on a menu he changes frequently.

“It’s very Korean, and it’s my memory,” Lee says. “When I was in elementary school in Korea, we had one with milk on May 5, Children’s Day. I remember that.”

Saboro-ppang is a sweet roll with a German-style streusel filling, a layer of thick buttercream and a touch of peanut butter.

Whatever similarities and differences we can see in the pastries and sweets of Korean bakeries, these entrepreneurs hope to expand their businesses and attract customers from many other cultures.