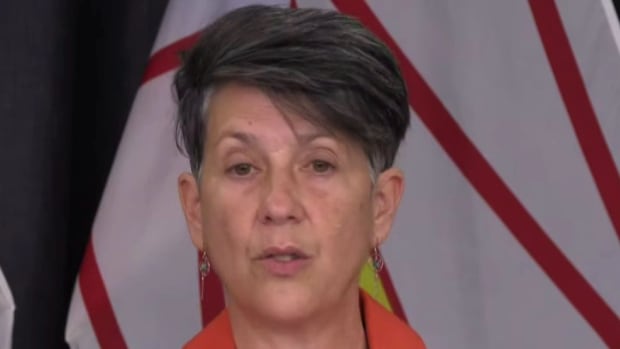 The 4th wave of COVID has ‘reached our shores’ as the virus spreads through central Newfoundland, infecting 45

Newfoundland and Labrador reported 45 new cases of COVID-19 on Friday, leaving the province with its highest number of active cases in more than six months.

According to Dr. Rosann Seviour, acting chief medical officer of health, 39 of the cases are in the central health region, which is currently facing the latest COVID-19 outbreak in the province.

Thirteen of the new cases reported on Friday were previously classified as presumptive positive.

Newfoundland and Labrador now has 109 active cases of COVID-19, the highest total number of cases since March 5.

“The 4th wave has unfortunately reached our shores,” Seviour told reporters in an unscheduled briefing on Friday afternoon, noting that a cluster of cases initially located in Baie Verte had started moving to the Twillingate area.

As a result, Twillingate, New World Island, and communities accessible via Route 340, starting at Boyd’s Cove and inclusive, will be upgraded to Alert Level 3 as of midnight. Non-essential travel in areas below Alert Level 3 should be limited, Seviour said.

Communities along routes 410 to 419 on the Baie Verte peninsula also remain below Alert Level 3.

There are 71 confirmed cases linked to the Central cluster, which includes 10 cases at the New World Academy in Summerford. As a result, the school will close in-person learning in favor of online courses.

The Health Ministry confirmed later on Friday that 21 of those cases, or 30%, are considered breakthrough cases, as COVID-19 infections have developed in fully vaccinated people.

Across the province, over 79 percent of the eligible population received two doses, while over 87 percent received at least one.

Tests will also be available in Twillingate, Baie Verte and Gander over the weekend. A total of 294,264 tests have now been performed in the province.

“An identified case is a contained case,” Seviour said. “Delta is here. And we have to show him the door.”

The province reported 13 recoveries on Friday, while two people are currently hospitalized due to the severity of COVID-19.

â€œOne hundred and nine cases is a threshold that we hoped not to see again. Frankly, this speaks to the importance of vaccinations at the community level, â€said Health Minister John Haggie.

Haggie added that the province will continue to keep the public informed of new cases of COVID over the weekend, which has been done previously during the pandemic when higher numbers of cases were reported.

Seviour and Haggie both pushed for reminding people to wear their masks when needed and the importance of following the health measures in place.

“We have already looked at the face of COVID and we will do it again. We have 18 months of this pandemic under our belt and it has been a long road for everyone,” she said.

“But these 18 months have armed us with the knowledge, tools and abilities to keep ourselves and our loved ones safe.”

Despite the dramatic increase in cases, Seviour expressed confidence in the health system’s ability to handle a spike in infections after speaking with Dr Proton Rahman, leader of the Earth’s COVID-19 data modeling team. -New and Labrador.

â€œHe told us that right now we are definitely not in an area where we are overwhelmed,â€ she said. “Even our total number of cases, we’re up toâ€¦ 1,654, which for some provinces is what they see in a day.”

Meanwhile, as communities in Newfoundland’s central health region continue to navigate the province’s latest COVID-19 outbreak, officials in the region say the onslaught of new cases is scaring the region. .

â€œI guess we’ve learned to live with it, but in this part of the province I’m not sure if we’ve ever had a positive case of COVID-19 in my districtâ€¦. Have a cluster like this happening. right now it scares people in my district. “

Warr said he was particularly concerned about the viral spread between the 19 communities in the area and a relatively low vaccination rate compared to the rest of Newfoundland.

Only 65.5% of the eligible population of the Baie Verte Peninsula is fully vaccinated – the lowest rate on the island – according to data provided to CBC News on Friday by the Department of Health.

Warr suggested that no case in the region could have led to appeasement.

â€œMaybe it’s the demographics. It’s definitely an aging population, especially in some of the smaller communities,â€ Warr said. “It’s very tight-knit, and the variant is known to spread widely. And it is.”

Seviour echoed Warr, suggesting that the province’s relative isolation from severe COVID outbreaks may have prompted some people not to get vaccinated earlier.

“I think one of the reasons is we feel pretty safe in Newfoundland, safe enough. Especially in our smaller areas, where we just don’t think COVID is going to get there,” he said. she declared.

“We are also reaching out to communities now in trying to understand a little better and help people make that choice.”

85 percent of Twillingate’s eligible population received two doses of the vaccine, according to Seviour.

COVID tests are available in Baie Verte on Friday and Sunday from 12 p.m. to 6 p.m. at the Tommy Ricketts arena. An appointment is not required, as those wishing to be tested are encouraged to remain in their vehicle until they are instructed to enter the test building.

Visitor restrictions have also been put in place at two regional health centers, the James Paton Memorial Center in Gander and the Central Newfoundland Regional Health Center in Grand Falls-Windsor.

Visiting hours will increase from 9 a.m. to 9 p.m. effective immediately, with COVID testing still in place. All patients can be accompanied by one person for emergencies, appointments or procedures. Emergency services and scheduled outpatient appointments are not affected.

Those who need information about loved ones affected by the change should contact the appropriate nursing unit, according to Central Health.