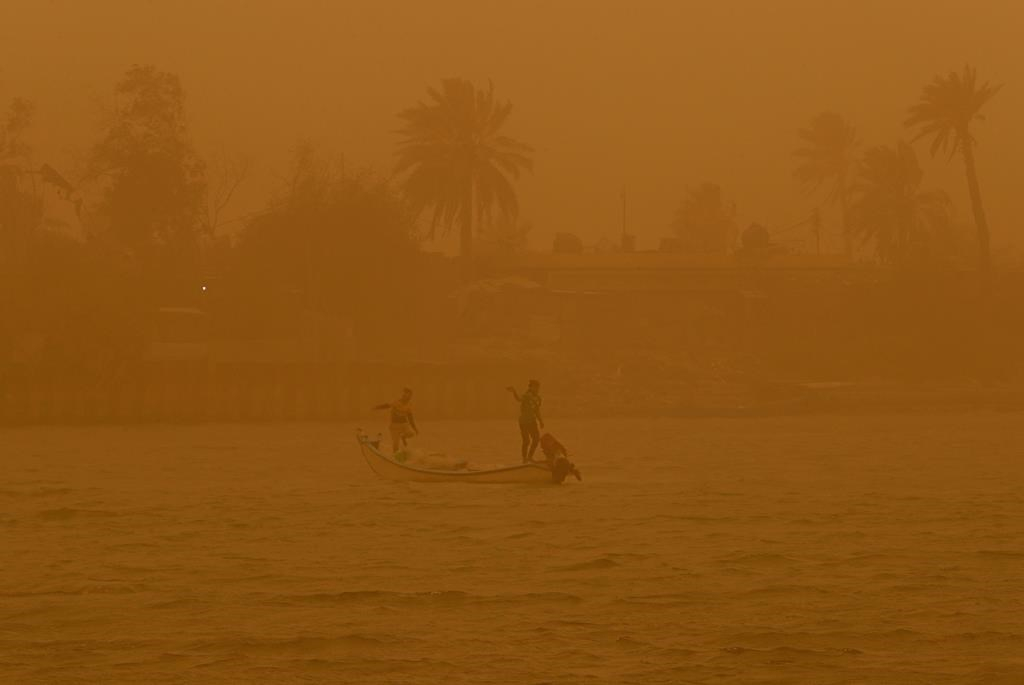 Temperatures in the Middle East have risen much faster than the world average over the last three decades. Rainfall has decreased and experts predict droughts will be more frequent and severe.

The Middle East is one of the most vulnerable regions in the world to the impact of climate change – and the effects are already being felt.

In Iraq, intensified sandstorms have cities repeatedly suffocated this year, shutting down business and sending thousands to hospitals. Increasing soil salinity in Egypt’s Nile Delta is eating away at crucial agricultural land. In Afghanistan, drought helped fuel the migration of young people from their villages in search of jobs. In recent weeks, temperatures in parts of the region have exceeded 50 degrees Celsius (122 degrees Fahrenheit).

Our award-winning journalists bring you the news that matters to you, Canada and the world. Don’t miss.

This year’s annual United Nations climate change conference, known as COP27, is being held in Egypt in November, casting a spotlight on the region. Governments in the Middle East have realized the dangers of climate change, especially the damage it is already inflicting on their economies.

“We literally see the effects right in front of us. … These impacts won’t hit us in nine or ten years,” said Lama El Hatow, an environment and climate change consultant who has worked with the World Bank and specializes in the Middle East and North Africa.

“More and more states are beginning to understand that we must” act, she said.

Egypt, Morocco and other countries in the region have stepped up their clean energy initiatives. But a top priority for them at COP−27 is to push for more international funding to help them deal with the dangers they already face from climate change.

One of the reasons for the vulnerability of the Middle East is that there is simply no margin to cushion the blow to millions of people as the temperature rise accelerates: the region is already experiencing temperatures high and limited water resources, even under normal circumstances.

Governments in the Middle East also have a limited capacity to adapt, International Monetary Fund noted in a report earlier this year. Economies and infrastructure are weak and regulations are often not enforced. Poverty is widespread, making job creation a priority over climate protection. Autocratic governments like Egypt’s severely restrict civil society, hindering an important tool for engaging the public on environmental and climate issues.

At the same time, developing countries are pressuring countries in the Middle East and elsewhere to cut emissions, even if they themselves go back on their promises.

Middle Eastern nations are waking up to the damage caused by #ClimateChange. #CrisisClimate #Middle East #Drought

The threats are terrible.

As the region becomes hotter and drier, the United Nations has warned that agricultural production in the Middle East could fall by 30% by 2025. The region is expected to lose 6% to 14% of its GDP by 2050 due to water scarcity, according to the World Bank.

In Egypt, rainfall dropped by 22% over the past 30 years, according to the World Bank.

Droughts are expected to become more frequent and severe. The eastern Mediterranean recently experienced its worst drought in 900 years, according to NASA, a blow for countries like Syria and Lebanon where agriculture depends on rainfall. Water demand in Jordan and the Persian Gulf countries puts unsustainable pressure on underground aquifers. In Iraq, increased aridity has caused an increase in sandstorms.

At the same time, warming waters and air make extreme and often destructive weather events more frequent, such as the deadly floods that repeatedly hit Sudan and Afghanistan.

Many of those who lose the livelihoods they once earned in farming or tourism will move to cities in search of work, said Chatham House associate researcher Karim Elgendy. It will likely increase urban unemployment, put a strain on social services and could increase social tensions and affect security, said Elgendy, who is also a nonresident fellow at the Middle East Institute.

Adapting infrastructure and economies to withstand the damage will cost enormously: the equivalent of 3.3% of the region’s GDP each year for the next 10 years, the IMF estimates. Spending should be on everything from creating more efficient water use systems and new farming methods to building coastal protections, strengthening social safety nets and improving awareness campaigns. .

Thus, one of the main priorities for the Middle East and other developing countries at this year’s COP is to pressure the United States, Europe and other wealthier countries to follow up on long-term pledges to provide them with billions in climate finance.

So far, developed countries have failed to deliver on these promises. In addition, most of the money they provided went to help poorer countries pay to reduce greenhouse gas emissions – for “mitigation”, in the terminology of the UN, as opposed to “adaptation”.

For this year’s COP, the main theme repeated by UN officials, Egyptian hosts and climate activists is implementing commitments. The rally aims to push countries to explain how they will meet promised emissions reduction targets – and to propose even deeper cuts, since experts say the targets as they currently stand will always lead to disastrous levels of warming.

Developing countries will also want wealthier countries to show how they will deliver on a pledge from the last COP to provide $500 billion in climate finance over the next five years – and to ensure that at least half of that finance is for adaptation, not mitigation.

However, world events threaten to undermine the momentum of COP26. As far as emission reductions are concerned, soaring global energy prices and the war in Ukraine have prompted some European countries turn back to coal for power generation – although they insist that it is only a temporary step. The Middle East also has several countries whose economies depend on their fossil fuel resources – Saudi Arabia and the Persian Gulf, of course, but also Egypt, with its growing production of natural gas.

Persistent inflation and the possibility of a recession could make major nations reluctant to make climate finance commitments.

While international officials often focus on reducing emissions, El Hatow said it should not be forgotten that countries in Africa, the Middle East and elsewhere in the developing world have not not contribute substantially to climate change, but bear the brunt of it.

“We need to talk about adaptation finance,” she said, “to adapt to a problem that they didn’t cause.”