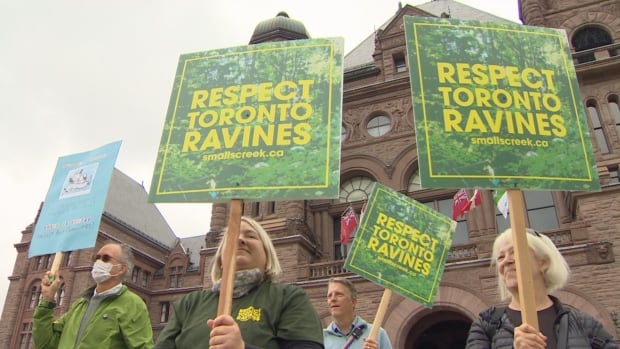 Dozens of protesters from the city’s seven community groups were in Queen’s Park on Wednesday to speak out against the way Metrolinx and the provincial government are approaching transit planning.

The groups call on the province and its regional public transport agency to make the health and well-being of local communities a priority and to listen to them when it comes to building transport projects in common in their neighborhoods.

“Our voice has been lost in this process of transit planning,” said Eon Song on behalf of Save Jimmie Simpson, one of the groups attending the protest. He said the groups might have different goals, but all want environmental reviews of projects and that Metrolinx is doing meaningful consultations with communities.

Current plans for the Ontario line, the Yonge North subway extension and the GO expansion will hurt green spaces, small businesses, schools and homes in communities and were made without public or stakeholder consultation, have writes the groups in a press release.

The groups said legislation introduced in fall 2020, the Building Transit Faster Act and Ministerial Zoning Orders (MZOs), which allow the government to allow development regardless of local rules, were used to overturn cities. . The government of Premier Doug Ford has used MZOs more frequently than any other government recently in power to advance projects.

Who protested and why

A community group from Riverside and Leslieville calling for the section of the Ontario line that runs through their community to be built underground to protect the health and environment of the community, including the neighborhood’s Jimmie Simpson Park.

Residents of the Upper Beaches and East Danforth area who are trying to stop Metrolinx from expanding the Lakeshore East rail corridor, which will clear cut more than 200 trees, many over 100 years old, in the ravines of Small’s Creek and Williamson Park starting this month, to allow for a proposed fourth track.

Keep the subway on Yonge

A group in the Thornhill neighborhood has asked Metrolinx to reconsider the construction of the Yonge North subway extension under the Royal Orchard neighborhood and to keep the line on its previously approved route under Yonge Street.

An East York community group made up of residents affected by the proposed Ontario line, who call on Metrolinx to hear and consider residents’ concerns while moving the line forward.

Other groups in attendance included the Lakeshore East Community Advisory Committee, Don’t Mess with The Don and First Parliament.

Of all the Toronto neighborhoods considered for the project, SaveTPARK says Thorncliffe Park was chosen for the Metrolinx Ontario Line marshalling yard because it is the poorest and least white.

“The Thorncliffe issue is scandalous,” Beaches-East York MP Rima Berns-McGown said in a speech at the rally.

She called Mextrolinx’s decision to build in the community and potentially force businesses like Iqbal Foods to move “extremely racist”, and said it was especially important to listen to racialized and working-class communities like Thorncliffe Park.

Metrolinx spokeswoman Anne Marie Aikins said the Ontario line needs a new marshalling yard and the goal is to have as little impact on businesses, jobs and residents as possible. .

“Despite the impacts this is going to have on this neighborhood, this is the least significant impact,” Aikins said of the Thorncliffe location.

Asked by CBC Toronto how Metrolinx would like to address concerns that there hasn’t been enough consultation, Aikins said Metrolinx has been tasked with building the necessary transit for decades and building projects for worth $ 80 billion, “about the same time.”

She said building in older, densely populated communities like Toronto is difficult, but Metrolinx has been building transit for a decade and knows what is needed to communicate with groups. Aikins said the agency opened community offices to answer questions and held public consultations, letters, newsletters and articles on its blog.

In Smalls Creek, she said Metrolinx will have to cut down a few trees, but promised to replace each tree cut with three.

Everyone wants public transit, but no one wants it to impact their backyard, she said.

A spokesperson for the Department of Transportation, Natasha Tremblay, said by email that the department will continue to work closely with transit partners, including the city of Toronto, while building transit and that Metrolinx ensures that residents’ concerns and comments are heard and incorporated into its plans. .

“Our government fully expects Metrolinx to remain accountable to the communities it serves and to conduct thoughtful and meaningful consultations where work is underway.