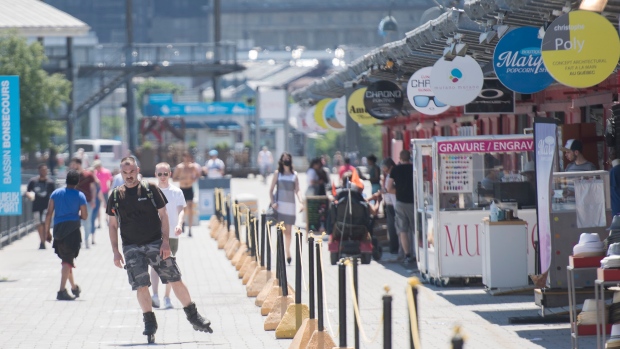 “That’s enough,” said Tourisme Montréal President and CEO Yves Lalumière at a press conference. “We are losing another summer,” he said, fearing that in a “competitive environment, visitors will choose another destination.”

Although fully vaccinated Canadians can cross the border with a negative test, non-essential international travelers are still denied access. Meanwhile, countries like the United States and France already allow entry of foreign nationals.

“COVID-19 does not recognize your passport,” said Christophe Hennebelle, vice president of human resources and public affairs at Transat Airlines. He argued that a double-vaccinated international traveler with a negative test result does not pose a higher risk of infection than a returning Canadian.

“For six months, we have been nailed to the ground, a situation which is devastating for more than 5,000 employees,” he added. Until the resumption of operations, “we will continue to accumulate debts, which will eventually have to be repaid”.

Unless there is an immediate reopening, the president and CEO of Aéroports de Montréal, Philippe Rainville, calls for “a clear plan” so as not to be caught off guard.

“We need time to take in additional manpower,” as many left the industry during the lockdown, he explained. Reopening without warning “will create chaos” and “a serious bottleneck problem”, while travelers will all have to be tested on site.

Trudeau has previously suggested that 75 percent of Canadians should be fully immunized before allowing international visitors in, before suggesting that 80 percent would be safer. The latest information available on the government website, dated July 3, puts the rate at 36%.

“It’s taking leadership,” said Michel Leblanc, president of the Board of Trade of Metropolitan Montreal. Anticipating a new difficult season, he wants the government “to confirm that all the support measures for the tourist industry will continue in the fall”.

“We have been asked for months to show solidarity with the health system”, but now “the whole tourism industry is suffering”.

Prime Minister Justin Trudeau, in the Gaspé on Wednesday, reacted to the discontent of the tourism industry.

“I was very happy to meet in Percé many tourists who came for the first time to Gaspésie, from all over Quebec and Ontario, because many Canadians decided that this year, instead of traveling abroad, they come and visit our beautiful regions of this country. And that’s a good thing, ”he noted.

He added this new argument to those he has been repeating for several weeks, namely that the pandemic is still not over, that there is no question of endangering the health of Canadians while variants circulate and that a large majority of Canadians are not fully immunized. . He also reiterated that there will be announcements of border relief “in due course”.

Several representatives of foreign governments have recently expressed their impatience with Canada’s refusal to open its borders.

French Ambassador Kareen Rispal pleaded Tuesday in an interview with The Canadian Press that “the borders should be reopened fairly quickly now, so that we can put Canada back on our travel plans,” adding that otherwise, “the French ministers go to countries where they can go.

A few weeks ago, US Senate Majority Leader Chuck Schumer called in a press release for the development of a “mutual plan” between the two countries. The Canada-U.S. Border is closed to tourists at least until July 21, a date that is expected to be postponed by Trudeau.

This report by La Presse Canadienne was first published in French on July 14, 2021.

This article was produced with the financial support of Facebook and the Canadian Press News Fellowships.

Alcohol Use Linked to Thousands of Cancer Cases in Canada in 2020: Study