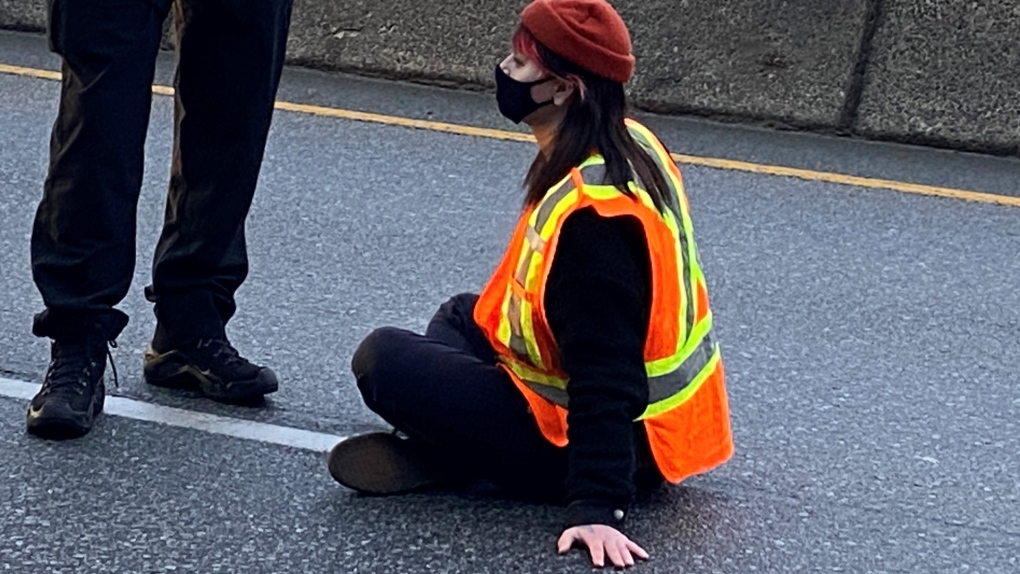 Traffic in West Vancouver: A protest against ancient logging blocks the highway. 1

A protester stuck his hand to the surface of Highway 1 during a protest against ancient logging in West Vancouver, British Columbia

A group gathered Wednesday morning on the stretch of the Trans-Canada Highway leading to the West Vancouver ferry terminal, including the activist who used glue to make his point.

Most held yellow and black signs with the message “Save Old Growth”.

One person was taken into custody before the protest was dispersed and the highway reopened.

Coordinator Ian Weber told CTV News the purpose of the protests is to permanently end all ancient logging in the province.

“We are just ordinary people who are terrified of our future. We want a habitable planet and we have seen so much tragedy in the last year,” he said in an interview in West Vancouver.

He listed heat dome, a weather phenomenon that claimed hundreds of lives in British Columbia over the summer, as well as destructive flooding in November that shut down some of the province’s highways for weeks.

“It’s going to happen naturally, so we’re trying to wake people up, get them trying to save old growth forests, and more.”

In a news release later that morning, police confirmed a single arrest out of 10 protesters who were on the freeway near Caulfeild.

“After being told to disperse by officers, all but one of the women left the highway,” the West Vancouver Police Department said in a statement.

“This woman has been arrested for obstructing the roadway and transported to cells where she is awaiting a bail hearing.”

In total, police said, westbound traffic was only blocked for about 10 minutes.

The protest was one of many in recent days and weeks in British Columbia, and according to those behind the efforts, “the frequency and scale of actions will escalate until all old logging is stopped”.

The protest was one of many in recent days and weeks in British Columbia, and according to those behind the efforts, “the frequency and scale of actions will escalate until all old logging is stopped”.

Weber said, “We’ll finish with a big hit on (January 31)” and then, after some time off, the band will “come back to you with even more” in March.

Organizers said in a press release ahead of the protest that efforts were directed at the provincial government.

“The government has the option of keeping its election promises or sending nonviolent people on the highways to jail,” they wrote.

Wednesday was not the first protest involving superglue. A similar tactic was used on another stretch of the Trans-Canada Highway during a protest last week.

“This is our last resort. We are afraid to sit on the road, but we will continue to do so until the government throws us in jail or fulfills its promise to save the old growth forests,” said the organizer Zain Haq in a press release.

Over the weekend, the Government of British Columbia announced an agreement between Western Forest Products and four First Nations to postpone the logging of rare, ancient and priority ancient trees on 25 square kilometers of land on the Vancouver Island for the next two years.

The province has pledged to postpone logging on a total of 2.6 million hectares of old-growth forest.