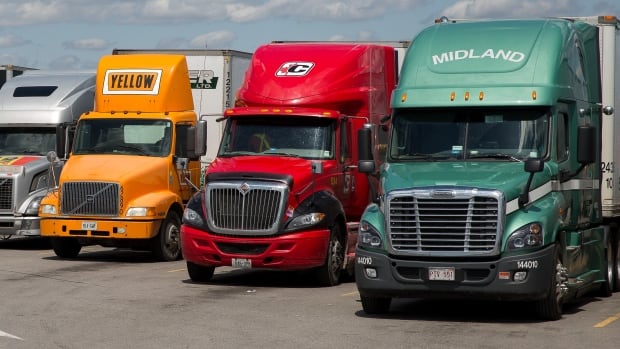 Blockages at points along the Canada-U.S. border are straining the already struggling supply chain, but the executive director of the Atlantic Provinces Trucking Association says it is not yet expected to cause too many problems in Atlantic Canada.

“Right now for us, we’re not that impacted, but that could easily change in a moment,” Jean-Marc Picard said.

Picard said blockages, like the one on the Ambassador Bridge between Windsor, Ontario. and Detroit, have not had much of an impact on the Atlantic provinces, as this route is mainly used for transporting auto parts.

He said supply chain issues could arise if a blockade were to form at one of the border crossings used for the Atlantic provinces, such as the one between Woodstock, NB and Houlton, Maine.

“If this one gets blocked or disrupted, we’ll see major impacts here,” Picard said.

The majority of goods in Atlantic Canada move into the region by ground transportation, Picard said, noting that many deliveries come from the United States.

Picard said resources are being put in place to ensure there would be no impact if a blockade on an Atlantic Canada border crossing were to occur. However, he warns that the situation could change quickly and that there could still be spillovers from the blockades in other parts of the country.

“Most businesses in Atlantic Canada will have trucks crossing the border into Ontario,” he said.

“There’s a truck that crosses the border every five seconds. No matter how you slice and dice it, there will be impacts and there will always be a trickle effect.”

Picard said another factor is that drivers are only allowed to drive a certain number of hours per day and their routes are planned with little flexibility.

“Any delay can impact deliveries not just that day, but for four or five days after that,” he said.

Picard said the protests are putting additional pressure on the already strained trucking industry. He said January had been a difficult month with a number of storms affecting shipping routes and a small number of drivers lost due to the vaccination mandate.

“It looks bad for the trucking industry,” he said, describing how a large majority of truckers are not participating in the protests.

“Ninety-nine percent of the industry is still doing what it’s been doing, which is moving goods like we’ve been doing throughout COVID… There’s a little percentage that obviously feels different and they want to be heard and they want to disrupt the supply chain to prove a point.… We’re not supporting that.

Picard said there was a shortage of drivers even before the vaccination mandate arrived and he said many truckers in the industry had a message for the protesters: “We heard you, but there it’s time to move on.”