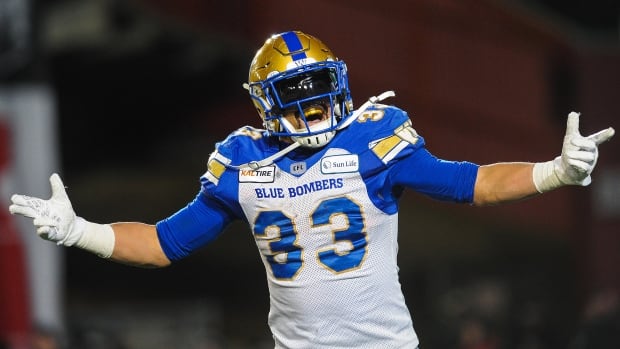 Time has given Andrew Harris a better understanding of what it takes to win the Gray Cup.

The veteran running back will look for a third Gray Cup in his 11-season CFL career on Sunday when the Winnipeg Blue Bombers face the Hamilton Tiger-Cats at Tim Hortons Field.

Harris won his first championship in 2011 with the BC Lions, then had to wait eight years before winning a second with the Bombers in 2019.

“I did not really appreciate [in 2011]Harris told reporters Wednesday. â€œIt was a really big game and it was amazing, but it was pretty easy back then.

It was a surprise victory as Hamilton posted a better 15-3 record in the CFL while Winnipeg (11-7) was third in the West Division.

The tables were turned in 2021 as the Bombers recorded a better mark of 11-3 while the Ticates (8-6) were second in the Eastern Division standings.

However, Hamilton will have the home court advantage on Sunday, something Harris enjoyed in 2011 when the Lions beat Winnipeg 34-23 at BC Place Stadium. The Ticates have the advantage of training at their facilities, sleeping in their own bed and having the overwhelming support of the crowd on game day Sunday.

â€œA lot of people see this as a big plus,â€ Harris said. â€œBut I think at the end of the day, professionally, you are preparing yourself in the right way.

“Once you’re on that pitch, the crowds shouldn’t really be a factor because you’re locked in and focused. You just have to log out and get the job done.”

Harris, who was also the top Canadian in the Gray Cup game in 2011, certainly did so last Sunday.

He ran for 136 yards and a touchdown in Winnipeg’s 21-17 victory over the Saskatchewan Roughriders in the Western Final. It was Harris’ first game since Oct. 15 with a knee injury.

And Winnipeg took the win despite six turnovers, which showed Harris something about his team.

“I realized that we had thick skin, [we’re] resilient, “he said.” We really haven’t faced such an ordeal this year, especially from a revenue perspective. “

Celebrating another championship would be a terrific end to a season that saw Harris’ 1,000-yard back-to-back campaign streak end at three. He ran for 623 yards on 116 carries and three touchdowns in seven regular season games.

“He came in and did his thing. We’re going to depend on him for this game too.”

And Harris is more than happy to end his season playing for another championship.

â€œIt’s the Gray Cup, it’s the biggest game of the year, it never gets old,â€ he said. â€œI’m thrilled to hang out with my teammates, I’m thrilled to represent my city, the team I’m playing for, the province I’m from and it’s exciting for me.

“It’s another game, it’s another opportunity. It could be a third ring and that’s exciting for me.”