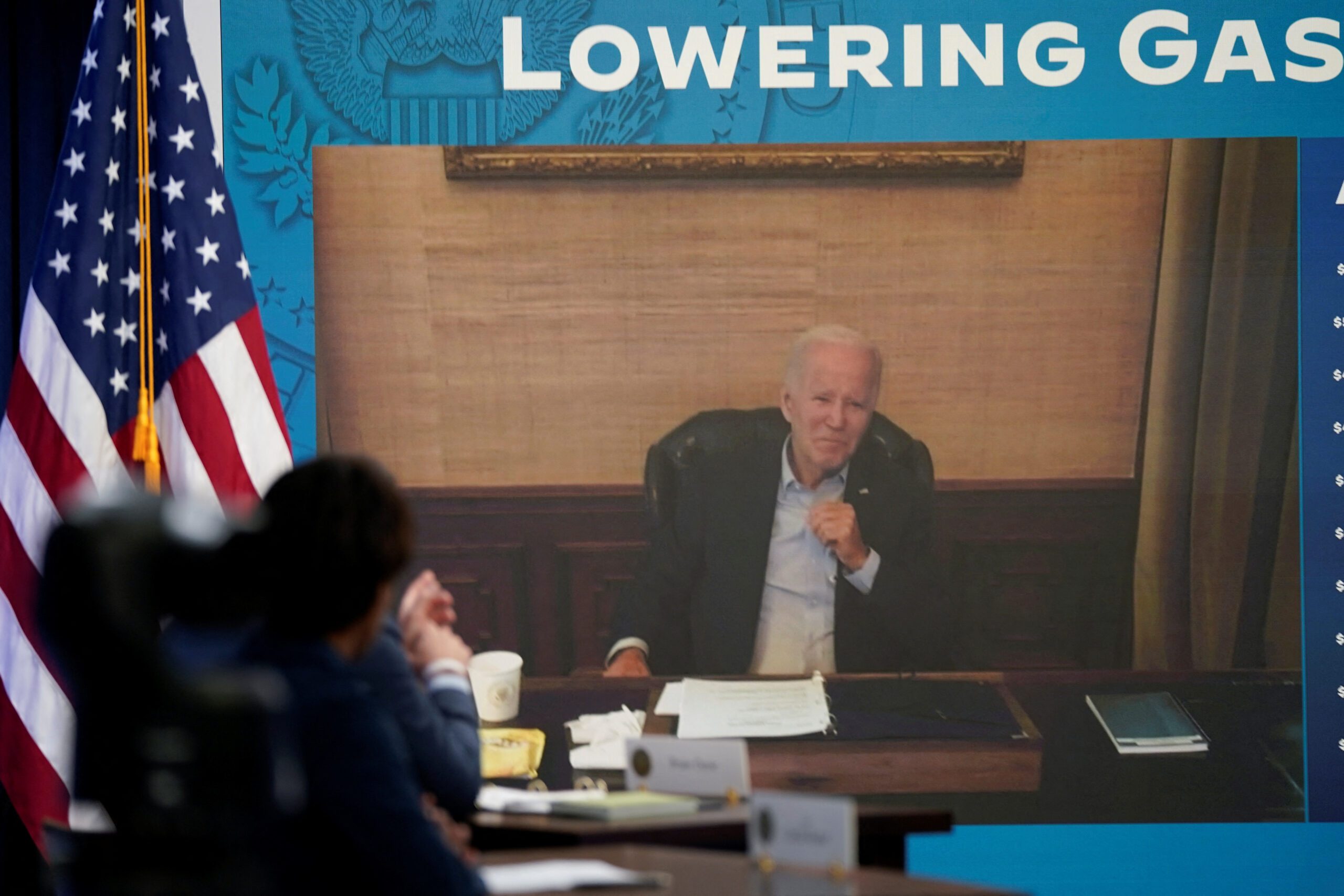 WASHINGTON, DC, USA – US President Joe Biden appeared virtually during a meeting of economic advisers at the White House on Friday to highlight his good health a day after testing positive for COVID-19.

Speaking from a distance during the meeting to discuss White House efforts to lower gas prices, Biden appeared vigorous and in high spirits but with a noticeably deeper voice, hours after his doctor released a statement that his symptoms had improved.

“I feel a lot better than I look,” he said, apologizing for the intermittent cough as he described recent efforts to lower gasoline prices. “Gas prices are falling. In fact, gas prices have fallen every day,” he said.

Sitting at a desk in the White House residence and flanked by a bag of Halls cough drops and a box of tissues that was quickly removed before his remarks began, Biden gave a thumbs up when reporters asked him how he felt.

Biden, 79, tested positive for COVID-19 on Thursday, when the White House said he had mild symptoms and would continue to work but in isolation. His diagnosis comes as a highly contagious subvariant of the coronavirus is driving a new surge of cases in the United States.

“His voice is deeper this morning. His pulse, blood pressure, respiratory rate and oxygen saturation remain normal, on room air,” O’Connor said. Biden has a runny nose, fatigue and an occasional dry cough, the doctor said.

During the Friday afternoon briefing, White House COVID-19 coordinator Dr. Ashish Jha pointed out that the reading of 99.4 F was the highest Biden had experienced during his illness. Jha noted that Biden’s vital signs remained within the normal range, but admitted the president has used an inhaler a few times since testing positive.

Overall, Jha said Biden was doing better, noting he slept well and ate breakfast and lunch. “He joked that his only regret was that his appetite hadn’t changed,” Jha said, adding that the president “was and is in very good spirits.”

On Friday, as the White House sought to convey a sense of normalcy, it also released another photo of Biden signing legislation a day earlier wearing a black mask.

O’Connor said two drugs Biden takes, Eliquis for atrial fibrillation and the cholesterol drug Crestor, are being temporarily withheld to avoid interfering with his treatment with the antiviral drug Paxlovid. He said low-dose aspirin was added to Biden’s treatment as an alternative blood thinner.

“The president is tolerating the treatment well,” he said.

Biden, who is the oldest person to ever serve as president of the United States, is due to hold a total of three virtual meetings with his staff on Friday, including his economic, legislative and national security aides, according to his schedule. public released by the White House.

He began experiencing typical COVID-19 symptoms and, once diagnosed with the virus, was immediately put on Paxlovid.

Jha said it’s still unclear where exactly Biden, who recently returned from a trip to the Middle East, contracted the coronavirus.

Speaking at Friday afternoon’s briefing, Jha also said the White House medical unit has identified and briefed 17 close contacts of Biden, including senior executives, and said so far that no staff had tested positive.

COVID-19 cases in the United States have jumped more than 25% in the past month, according to data from the Centers for Disease Control and Prevention (CDC), as the new BA.5 subvariant takes hold there and around the world.

Biden had planned to visit his home state of Delaware this weekend, but instead first lady Jill Biden, who has so far tested negative, will stay there while the president isolates himself at home. White.

Paxlovid, the Pfizer Inc antiviral drug that the president takes, has been shown to reduce the risk of serious illness by nearly 90% in high-risk patients if given within the first five days of infection. but has also been associated with rebound infections in some cases.

Even with the powerful antiviral drug and vaccines, a small percentage of seniors end up in hospital.

However, health experts noted that Biden appears to be in relatively good health for his age, as evidenced by the president’s physical exam in late 2021. – Rappler.com