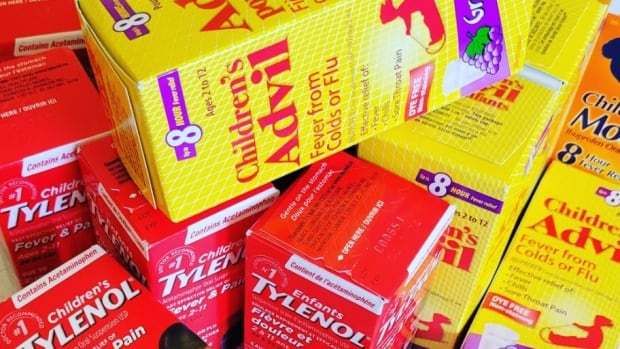 Waterloo Region community, pharmacists fill a need due to a shortage of children’s medications

Amid a nationwide shortage of children’s cold and flu medications, many parents in Waterloo Region and beyond have had to rely on friends and family, neighbors and local pharmacists to get the help they needed.

Stephanie Wilson from Cambridge was one of those parents when her five-year-old son and eight-month-old daughter came down with a fever last week.

She had initially gone to her doctor’s office suspecting her daughter was teething, but was told she might have respiratory syncytial virus (RSV).

“My doctor’s office couldn’t offer samples because she was out of Tylenol or Advil they could give,” she said.

Wilson said she was worried about how she could comfort her daughter or bring down her fever without medication. But, thanks to the support of friends and family, Wilson was able to get medicine.

“My aunt from Prince Edward Island sent some to me…so I should be getting this this week and my stepdad is coming back from the States and he’s also bringing some back for us because there’s 10 grandchildren in the family,” she says.

As respiratory illnesses increase among children, pediatric units in Ontario hospitals operate at overcapacity. The inpatient unit at Grand River Hospital, for example, has an occupancy rate of 150%.

The hospital said it had admitted 37 patients aged zero to 17 who tested positive for respiratory illnesses including influenza, RSV and COVID-19.

“We are working closely every day with regional and provincial partners to plan and share resources, to ensure children have access to the care they need,” a spokesperson said in a statement to CBC Kitchener- Waterloo.

“Community members can take steps to protect themselves and local children from respiratory viruses by continuing to wear masks, washing their hands frequently, staying home when you feel sick, and keeping update your COVID-19 and flu shots.”

“This is what communities do”

Kari Raymer Bishop is doing what she can from her home in Paris, Ontario, handing out whatever cold and flu medicine she has for children to parents in need.

“I started being careful when I was in the stores,” Raymer Bishop said.

“I’m a bit of a preparer and that comes from living abroad and having to be on my own to solve problems and I wanted to make sure we had what we needed ahead of a difficult year. “

Anticipating that cold and flu season was going to be tough, Raymer Bishop said she reached out to friends and family who might be in need and picked up a few boxes from different pharmacies or convenience stores on his return from Prince Edward Island during the summer. .

“I would see if I could take two or three bottles because I didn’t want to leave any shelves empty. Even then, there were signs of fewer options,” she said.

She did the same when she and her husband crossed the border to New York to get vaccinated in September. Now Raymer Bishop said she receives messages from parents almost daily. She said there was one night last week when six families came to her door.

“People are floundering right now. There are so many sick children and parents are in desperate need of help,” she said.

“I feel like if there’s anything we can do to help each other, it’s what we do. It’s what communities do and it’s what parents do for them. other parents.”

Acharya said her pharmacy receives around 15 calls a day from parents asking for help.

“Having sick children right now is very common and I’ve been through that too and it’s definitely a very stressful situation,” he said.

That’s why his drugstore compounded acetaminophen and ibuprofen — what’s found in Tylenol and Advil — to create a dosage for children.

In Waterloo, Phil Hudson and his team at Beechwood Wellness Pharmacy are doing the same. Hudson said her pharmacy gets nearly 35 calls a day from parents.

“We’re trying to keep up with that demand and it also becomes more difficult because when we’re making medicine, when we’re compounding something…we can only give it a shelf life of 14 days, which also adds stress. “, he said.

Both Hudson and Acharya say they are happy to be able to step in and offer parents a solution.

“Hopefully this will be the stopgap we need until we get more commercially available products,” Acharya said.

On Monday, Health Canada said a foreign supply of children’s drug now secure available at retail and in community pharmacies in the coming weeks. The amount of drugs to come was not disclosed.

Update: We have secured the overseas supply of children’s acetaminophen – and it will be available for sale in stores and pharmacies as soon as possible. @GovCanHealth also approved the import of ibuprofen and acetaminophen so hospitals also have the supplies they need.