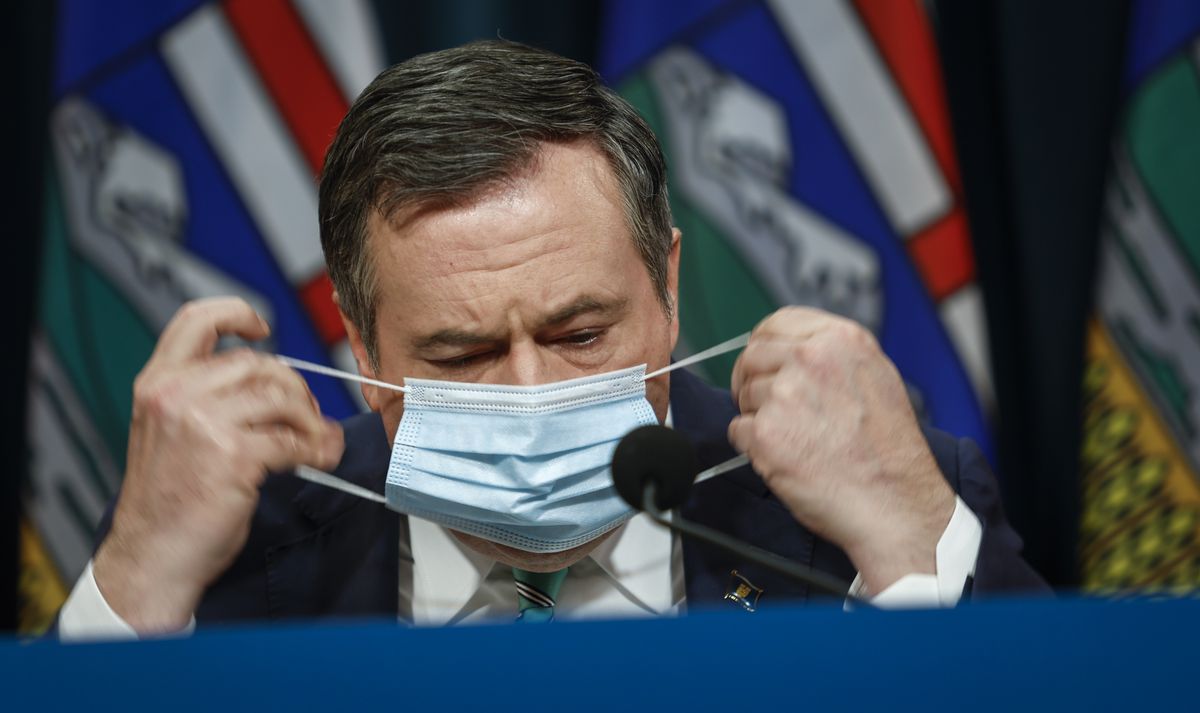 Alberta and Saskatchewan, which have implemented some of the least stringent public health measures throughout the COVID-19 pandemic, become the first provinces to end their vaccine passport system.

The premiers of the two provinces announced plans on Tuesday under which almost all public health restrictions, including vaccination passports and mandatory masks, will be lifted in the coming weeks. Alberta’s vaccine passport system expired abruptly Tuesday night at midnight, while Saskatchewan’s vaccine passport system ends Sunday night at midnight.

Children in Alberta will no longer be subject to the provincial mask mandate starting this weekend, while the mandate will be lifted for all others on March 1 as long as hospital admissions continue to decline. Saskatchewan plans to lift its mask rules at the end of the month.

Saskatchewan’s Scott Moe gave a speech quoting Britain’s wartime Prime Minister Winston Churchill and pledged to heal the divisions caused by public health measures. He argued that vaccine passports had been rendered meaningless by the Omicron variant and outlined a plan to lift restrictions he said were designed to accommodate life with COVID-19.

In Alberta, Premier Jason Kenney outlined his plan in a lunchtime speech, saying the benefits of public health measures no longer outweigh the harms. Kenney has boasted of his province’s lighter touch to COVID-19 throughout the pandemic and has often waited longer than other provinces to step in with restrictions and then removed them sooner.

This approach has left Alberta with some of the highest infection rates in the country and, at times, the highest rates of new deaths from COVID-19, along with Saskatchewan.

Mr Kenney said the government has always sought to use public health restrictions only when absolutely necessary. He said lower infections and hospital admissions, along with higher infection rates, mean COVID-19 poses less risk to the healthcare system.

“With what we know about the virus and the tools we have to fight it, the public health threat of COVID-19 no longer outweighs the hugely damaging impact of health restrictions on our society, on the health people’s mental health, their emotional well-being and our broader social health,” he said.

“Now is the time to start learning to live with COVID-19.”

Saskatchewan recently announced it would end lab testing for most people, relying instead on rapid tests, and only release data once a week.

The approach in Saskatchewan and Alberta contrasts with British Columbia, where Premier John Horgan suggests policies such as masking will be in place for some time. Mr Horgan said his government would follow the science.

However, B.C. Public Health Officer Bonnie Henry also suggested the province look into how it can live with COVID-19, including relaxed public health measures, starting with collecting limits. later this month.

While Saskatchewan and Alberta are the first in Canada to lift their vaccination passports and other restrictions such as mask-wearing, other provinces have signaled plans to lift or ease public health measures. .

Quebec Premier Francois Legault said Tuesday that his province would remove most public health measures by March 14, although the plan does not include lifting mask mandates or vaccination passports.

Ontario Premier Doug Ford released a plan last month to slowly ease restrictions, which has already begun, but the province’s plan is far more cautious than what’s happening on the Prairies. Even in March, the the province will impose limits on social gatherings indoorsand the plan included no firm date for ending the vaccine passport or a provincial mask mandate.

Manitoba officials also said they would soon announce their intention to lift the restrictions.

This is Western Canada’s weekly newsletter written by BC Editor Wendy Cox and head of the Alberta office James Keller. If you read this on the web, or if it was forwarded to you by someone else, you can subscribe to this and all Globe newsletters here.